One of my favorite movies ever... "Flyboys" starring the one and only James Franco. Honest, I do like the movie for more reasons besides being smitten with the lead actor. I have a thing for airplanes... especially old military ones. And I like movies set in days before my time. As I watching, though, I noticed all these ways that the movie makes Rawlings (Franco's character) completely irresistible. So I thought it'd be a little fun and different to write a post about it. (Did you know that Franco is also at the top of Cosmopolitan's Stud Meter this month?!)

Here are the top ten reasons for Rawlings' appeal... 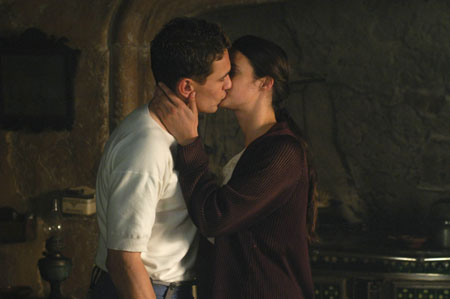 10. His relationship with Lucienne and how he treats her. It's adorable how he's so obvious with how much he likes her. He's so bold and straightforward with his feelings. And then when they finally kiss... he practically melts.

9. Who knew suspenders could be so sexy? James Franco should probably coach every guy on how to remove trousers like that. :P 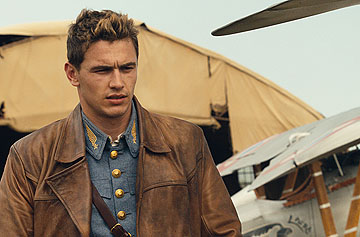 8. That laid-back, subtly bad-boy, "I don't care" attitude paired up with his strong sense of honor and justice. Rawlings first comes off as a laid-back cowboy but it becomes clear how passionate he is about what he does and the people he cares for.

7. Riding around in an open airplane on a gorgeous day in France. That's arguably one of the best first date ideas... ever. You'd think that the downpour would ruin the moment, but a drenched stud only makes it better.

6. Rawlings is a natural born leader among the men and (while being one of them) definitely stands out amongst them.

5. The way he rides horseback to go and meet Lucienne at her home. And furthermore, the way he goofs off to get laughs out of those kids. That's just cute.

4. The way he rides the motorbike on his way to Paris to see Lucienne in the hospital.

3. He's a fierce flyer and fighter. I'd jump into a plane with him any day.
2. Man in uniform. Need I really say more? 1. Eyebrow raises. Don't laugh. You're probably wondering why eyebrow raises are the number one reason that I find Rawlings irresistible. I can't quite answer your question. There's just something about a gorgeous guy with gorgeous eyes raising one eyebrow... it gets me every time.
There you have it. I'm only really crazy over two movie characters: Rawlings from "Flyboys" and Rhett Butler from "Gone with the Wind". So while you probably won't see a list like this for a while, don't be surprised if a Clark Gable one does pop up sometime in the future. If you haven't seen Flyboys, please do. It's an action-packed, romantic, tear-jerker of a film.

Oh, and don't tell my boyfriend about this post. ;)
♥Amore

p.s. The sources for all the photos above were really random... as I used Google to image search. But if you're longing to know the original source, just click on the picture itself. :)
on May 28, 2010

I totally know what you mean about the eyebrow thing! It's great!!!

Love the movie its so beautiful!
but r u sure its Rawlings u r crazy about and not Franco...?
10- JAmes is adorable and imo best onscreen kisser ever...melts me.
09- thats Franco removing his pants not Rawlings
08- he always had this bad boy rep. and is so passionate about art
07- got his flying license while filming this movie
06- defenitly stands among other actors
05- he is goofy and cute
04- he rode motorcicles in several movies always looking hot on them
03- james can pilot a real plane 2
02- wore uniforms in other flicks
01- ohh...and that sexy eyebrow thingy 100% Franco