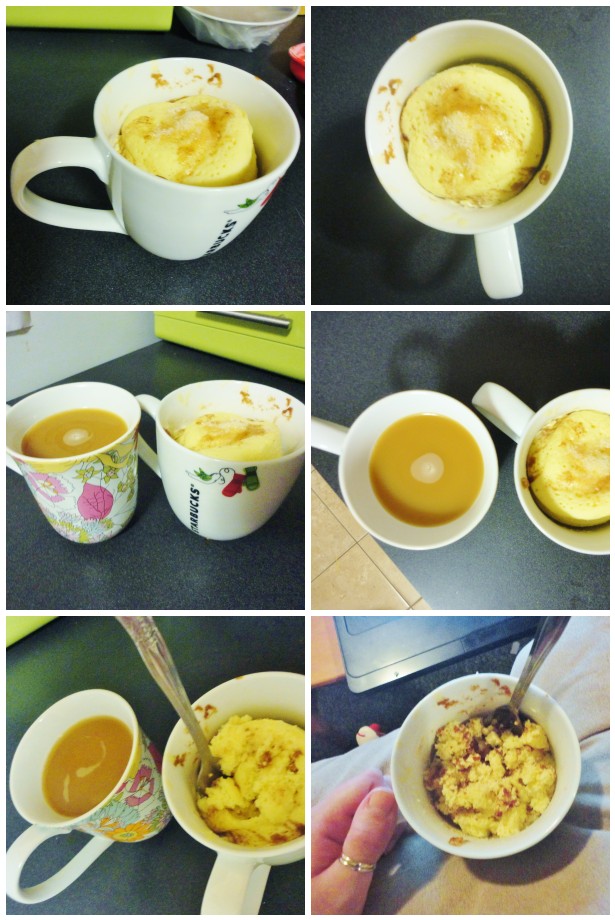 Where'd the weekend go?!  After suffering from allergies most of last week and then going out with friends three consecutive nights this weekend, I really needed today to recover and recharge in glorious solitude.  I planned to spend the day doing some light housework, laundry, and some diy projects.  I didn't turn out to be so ambitious.  So my Sunday was spent napping, popping allergy meds, and a lot of New Girl, Big Bang Theory, and How I Met Your Mother.

But the pinnacle of my night came to me in mug form.  After a delicious supper of buttery, parmesan-sprinkled asparagus (I can't get enough of that veggie!) my rare sweet-tooth kicked in.  I say rare because I very rarely crave anything sweet.  My cravings are usually for something of the spicy or savory sort.  But once in a while, I do get the craving for something a little sugary.  And it happened tonight.

So out to the kitchen I went.  And into the cupboards I rummaged.  And came up empty handed.  No cookies.  No candies.  I was going to have to roll up my sleeves, put on my apron, and get to work.  But first, I needed a recipe!  Naturally, I hopped on over to Pinterest and found the blog My Happy Place.  Blogger Sophie lists a whole bunch of single serving mug recipes.  Decisions, decisions!  Initially, I longed to whip up the mouthwatering Brownie in a Cup.  ...But my cupboards yielded no cocoa or chocolate of any sort.  So I went on to Plan B: Coffee Cake in a Cup.  I followed her recipe, but used a whole egg instead of half.  And I microwaved for about 1:45 total.

It turned out fluffy, cinnamon-sugary, just enough sweet but not too sweet, and totally tasty!  And it also gave me the perfect excuse to brew a pot of coffee... like I really need an excuse. ;)  (Hopefully this java will inspire some productivity and creativity this evening.)

Hey there! Thanks so much for linking back to my blog! A lot of people don't do that. Hope you have a great day :)

Those are literally the sitcoms that I catch up on every weekend - only throw in Modern Family as well :)