I have a confession to make.  I hate milk.  White dairy milk, that is.  (I love chocolate milk!)  I'm not lactose intolerant or anything.  I just don't care for the taste... especially the aftertaste.  Whether it's skim, 1%, 2%, or whole... I'm not a fan.  I don't mind a splash of it on my cereal.  And I'll drink it with the right proportion of chocolate, brownies, or Oreos.  And try as I might to justify eating a gob of chocolate just to down a glass of milk, I decided the time had come to seek out alternatives.

For while now, I've been wanting to try both soy milk and almond milk.  I'd look at the cartons every trip to the grocery store.  Curious as to the taste, reluctant when it came to the price.  You see, on a college student budget... something that costs sometimes nearly double the cost of regular milk gets left out of the grocery cart in favor of tacos, wine, coffee, and other staples.  But this past week I decided to give up a few tacos and try some new milk. 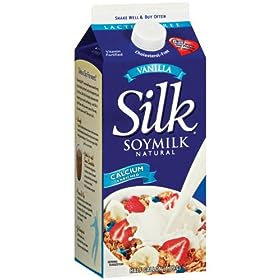 The first one I bought was Silk soy milk in vanilla (left).  It was love at first sip.  It isn't like dairy milk at all, which is probably why I love it so much.  It has a delicious, subtle vanilla taste and leaves no sour aftertaste.  I drank the stuff non-stop---a glass as a snack, a glass with my supper, over my cereal.  I guzzled it like there was no tomorrow.  And by the end of the second day after I'd purchased it, the carton was empty.

For you health-conscious undergrads out there, I've snatched up a couple nutritional facts.  Silk soy milk boasts 6 grams of soy protein, 50% more calcium than dairy milk, no lactose or dairy, low saturated fat, naturally occurring ALA omega-3, and zero cholesterol.  Plus, it's a shelf stable product that can be stored for up to 12 months!

I hit up the grocery store again a few days later.  While I longed to buy five or six cartons of my newly beloved soy milk, I decided to try almond milk this time around.  I bought Blue Diamond's Almond Breeze in the sweetened original (right).  I find almond milk to taste a lot more like traditional dairy milk.  It feels the same on the tongue and has a similar taste, but it is sweeter and doesn't leave the sour dairy aftertaste.  I like it more than dairy milk, but less than the vanilla soy milk.  (I think I might like it better if I get it in the vanilla flavor next time.)

As for the nutritional 411 on this almond milk:  Almond Breeze has half the calories of dairy milk. The sweetened version that I tried is sweetened with evaporated cane juice ("a less processed form of sugar that retains more of sugar cane's nutritional value").  It's also a great source of calcium.

So there you have it!  If you've tried either of these or plan to... let me know what you think! This week I'm on to trying the chocolate versions. ;)

Brittany said…
I am lactose intolerant, so a few years ago I was pretty much forced to find a replacement for traditional diary milk. Luckily, both of my sisters became L.I. around 24 too, so they introduced me to Almond milk (the same brand you listed). I'm pretty sure I buy the vanilla flavored one, and it has a pink circle and says 40 calories on it. That one's my favorite. I'm not big on drinking it in a glass (I've never drank milk like that), but I love it in my cereal, protein shakes, recipes, whatever! I think it's fabulous :) And soy milk is good too, but I am more of an Almond milk fan! Also, try coconut milk, if you haven't already. It's fabulous!
February 26, 2012 at 4:39 PM

Unknown said…
I'm the same way! I grew up drinking more goat milk, and just never was a fan of cow milk. I have been drinking almond and hemp milk for about ten years now, and I think they're great -- on cereal, even as an alternative to milk in some recipes (I don't shortchange on cream, though). Be careful with soy milks, sometimes you're still going to end up drinking GMOs, and that isn't good.
February 26, 2012 at 4:56 PM

Ally said…
Thank you SO much for this - I hate the taste and aftertaste of cow's milk, and I have been looking for an alternative, because I am positive that no matter how much cheese I eat, I will not get enough calcium into my system. I'm not a yogurt girl, either, and that makes it difficult. I think I'll be grabbing a small carton of the Vanilla Silk the next time I hit the grocery store! :-)
February 26, 2012 at 5:19 PM

Lauren said…
I hate milk too! I agree that a handful of cookies can wash down the taste of milk, but some alternatives are probably the better (& healthier) option. I have tried chocolate almond milk before and it is pretty good. I'm curious to try the Vanilla Silk milk now. I thought it would just taste like regular milk, but if you like it so much, it can't be too bad :)

Ashley said…
We try to use vegan alternatives whenever possible (even though we're just plain old vegetarians), so we buy plain almond milk to pour over cereal, cook with, etc. I don't drink it plain (although Silk chocolate soy milk is INCREDIBLE), so I really can't tell the difference between soy and almond. I just know that both are wayyy better than dairy milk:)

Lauren Alyse said…
I'm the complete opposite: I used to guzzle dairy milk like crazy. But then I figured out that I'm lactose intolerant and had to look for alternatives to get my much-needed calcium. I love Silk vanilla (and chocolate!) soymilk, and while I haven't tried the Almond Breeze almond milk, I drink the Silk almond milk every so often. I also suggest So Delicious or Silk coconut milk if you like the taste of coconut. The vanilla flavor is great for drinking in a glass, and the unsweetened is what I use with cereal, smoothies, or recipes. I still miss my dairy milk, though.
February 27, 2012 at 9:49 AM

Elle said…
I'm vegetarian, so while I use cow's milk occasionally, I try to avoid it as much as possible. I didn't quite get almond milk (I tried the Silk version though), but I love soy milk. I also enjoy coconut milk like Lauren suggested, and oat milk, which I make my self. Next on my list to try is rice milk!
March 4, 2012 at 8:58 PM

Camille said…
Ok, next you have to try Hemp Milk and Rice Milk. :) I'd love to get your thoughts on those, although I have to say I have had varieties of all of these, soy, almond, hemp, rice that are very different in taste, so try a few different brands out too. :)
March 11, 2012 at 6:52 PM

Christina Ventura-DiPersia said…
I couldn't disagree more about the taste of Vanilla Soymilk. I think it's terrible. It has an aftertaste that you really have to plow through. And I'm not convinced that soy is healthy for pregnant women or women of child bearing age since soy can produce pseudo-estrogens in your body. Being 5 months preggers myself, I have been exploring various options for dairy alternatives. Store-brand sweetened almond milks taste worlds better than blue diamond (although blue diamond almond is better than soy, by far). Coconut milk is a great alternative too, but don't get Silk's version because it tastes and has the consistency of Maalox to a tee. I've heard mixed reviews on rice milk, so I'd try that as a last alternative.
January 2, 2013 at 1:20 PM