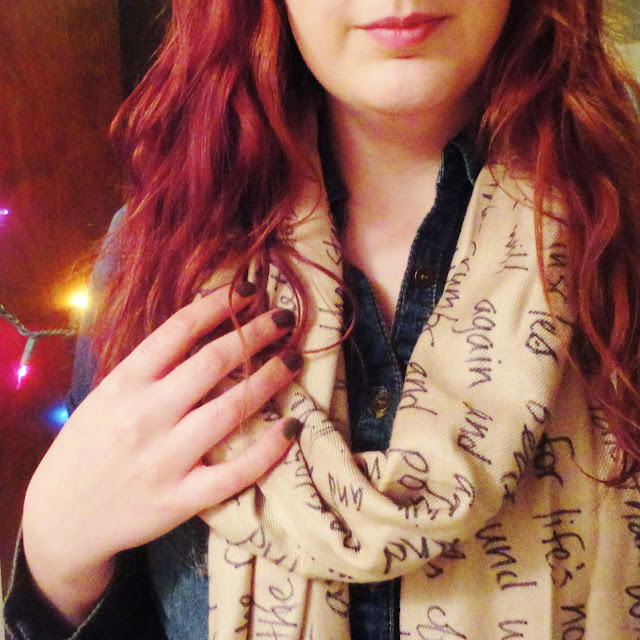 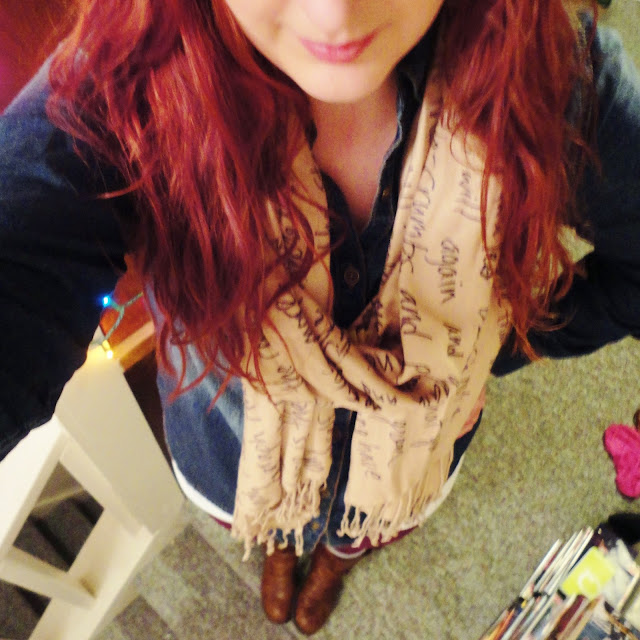 I love this project so much. I've seen scarves like these in shops and online that were so expensive, but for a book lover like me, they're perfect. I will definitely have to try this project!

I just love your blog, I've been reading through it all for the last few days. Thanks for posting such great content, you're an inspiration to an aspiring blogger. :)

I saw this on Pinterest forever ago and have wanted to try it ever since! I will definitely have to do this now. Yours turned out great!

That's such a great idea!! I'm so trying that out too! Perhaps even for a Christmas gift? Great job as always :)

I love this idea! I definitely want to try it soon. :)

Oh wow!!! LOVE it! I fear my handwriting on it would make an utter mess though... lol Beautiful scarf Jessica! Always love your posts.

This is awesome. I really want to do this. Yours turned out so great!

I told my mom about it, and she said instead of ironing it, you can put your scarf on a baking sheet (or two) in your oven on a low temperature for a while to set the ink.

I told my mom about it, and she said that instead of ironing it, you can put your scarf on a baking sheet (or two!) and pop it into the oven on a low temperature for a while to set the ink.

its funny bc e.e. cummings is exactly who i thought id put on mine when i saw the writing in a scarf idea!

I have this really classy (meaning she digs scarves and blazers and k
loves red lipstick) and literary friend, and I had no idea what to give her for Christmas. Then I saw this blog and eventually found this post, I freaked out when I saw this scarf, I knew it would be perfect for her. I dedicated sections of the scarf to her favorite books, Jane Eyre, The Divine Comedy, Anna Karenina, and Sense and Sensibility. She absolutely loved it, thanks so much for the idea!

Wow, awesome blog layout! How long have you been blogging for?
you made blogging look easy. The overall look of your
site is magnificent, let alone the content!

I read some articles on this site and I think your blog is really interesting and has great information. Thanks for sharing.

I enjoyed over study your weblog post. Your blog have fine data, I were given properly ideas from this high-quality blog.

I should say only that its awesome! The blog is informational and always produce amazing things

I'm so happy to finally find a post with what I want. 안전놀이터순위 You have inspired me a lot. If you are satisfied, please visit my website and leave your feedback.

I had a lot of fun at this Olympics, but something was missing. I hope there's an audience next time.안전토토사이트

I was looking for another article by chance and found your article룰렛 I am writing on this topic, so I think it will help a lot. I leave my blog address below. Please visit once.

I’m thinking some of my readers might find a bit of this interesting. Do you mind if I post a clip from this and link back? Thanks 사설토토

What a post I've been looking for! I'm very happy to finally read this post. 안전놀이터 Thank you very much. Can I refer to your post on my website? Your post touched me a lot and helped me a lot. If you have any questions, please visit my site and read what kind of posts I am posting. I am sure it will be interesting.

It's amazing. I want to learn your writing skills. In fact, I also have a website. If you are okay, please visit once and leave your opinion. Thank you. 바카라게임사이트