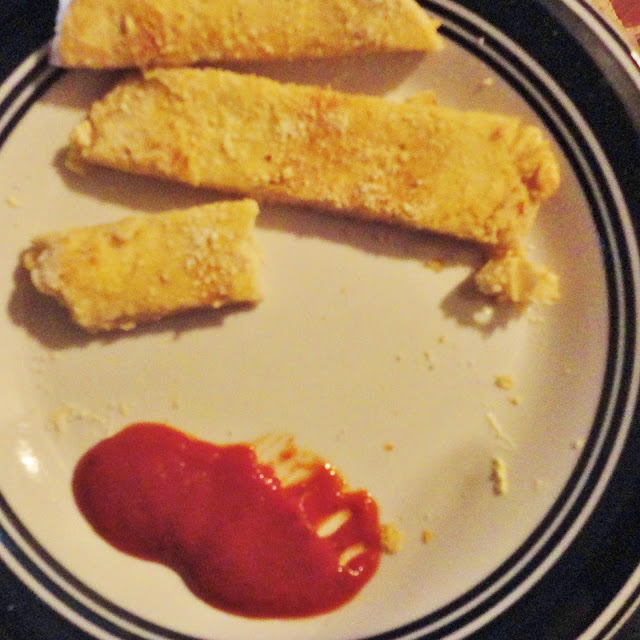 Okay, first off: I'm the worst food photographer in the entire world.  I snapped this before my camera died and 1/3 of the way through eating.  It's blurry.  It's messy.  But it was yummy!  So on the with blog post.

I had a craving for bread sticks.  Buttery, parmesan-covered breadsticks.  With marinara dipping sauce.  But there were several problems with my craving.  1) I didn't want to leave the apartment.  It's ten(ish) degrees out there.  It's nice and cozy in here.  So pick-up and grocery shopping are out of the picture.  2) Ordering bread sticks for one isn't entirely budget-friendly.  I'm trying to spend less and save more.  So ordering bread sticks delivery on a whim is unfeasible.  (And you usually have to order above a certain dollar amount before they'll deliver.  Like I said, this girl is staying in and out of the cold.)  3) I don't know the facts, but I'm pretty sure pizza place bread sticks aren't so good for you.  And I am trying to be more conscious of what I eat.

So I had to come up with a creative solution.  A while back, I was curious and Googled Depression-era recipes.  (Just one of those random searches I come up with during the day.)  I came across a recipe for Poor Man's Bread.  I tried it that night and found it to be surprisingly good.  Tonight, I searched high and low but could not find that exact recipe.  Luckily, I remembered most of it.  And I decided to attempt bread sticks with it.  ;)

The recipe calls for 1 cup flour, 1 cup water, and 1 teaspoon baking powder.  You mix it, pour it into a frying pan, and basically treat it like a pancake.  Flip it every so often until both sides become golden brown.  It becomes a sort of... well, flat-bread.

The 1 cup mixture is just too much for me to eat alone.  So I cut the recipe in half.  I also tossed in some oregano, basil, garlic, Italian seasoning, and Parmesan-Romano grated cheese.  When it was finished in the skillet, I buttered the top and sprinkled more cheese over it.  I sliced it into strips with a pizza cutter and squeezed some pizza sauce onto the side of the plate.  Voila!  Bread sticks in less than ten minutes!

I was a little weary that the sticks would disappointment me.  The bread is a very flat type and I wasn't sure if it was cut out for the pizza sauce.  But I found myself pleasantly surprised!  They were delicious and hit the spot!  (So I won't have to be ordering in or hitting up the grocery store on this freezing evening.)  The herbs I threw in made all the difference and next time I'll add more herbs and cheese.

Now I'm thinking about all the other things I can do with Poor Man's Bread!

That sounds so yummy! Definitely going to try it!