I came across this nifty little image at a website called Safe On Campus. For college students living in dorms and apartments, it's important to be educated on fire safety... one of the most important things being prevention. The above picture illustrates fire hazards in dorm rooms/apartments. Many colleges take the initiative to outlaw things such as incense, candles, extension cords, hot plates, and irons in the dorms... but if the school doesn't or if you're living off campus, it's critical to be aware of fire hazards for the safety of everyone in the building including you!
My solutions to the above 6 fire hazards:

1. First of all, don't smoke! It's bad for you. If you're into burning incense because it makes the room smell good, try reed diffusers instead. Reed diffusers (which are flame-free) consist of a bottle of scented oil and several reeds that stick out the top. These things really do fill the room with fragrance! Reed diffusers can be found anywhere, including Wal-mart and Target. Check out these ones from the Yankee Candle Company:

2. Be selective with what you have plugged into an outlet. Did you know that if something is plugged in it is still taking up electricity... even if it's not turned on? To save energy, unplug things such as the tv or microwave when not in the room. To be safe and avoid fire hazards, only plug in what you need plugged in at the time. Your cell phone charger, computer charger, microwave, and desk lamp don't need to be plugged in 24/7. Save the outlets for things such as your refrigerator. Then, when you need to charge your phone or turn on the lamp... plug those things into a surge protector temporarily. Maybe one like this from Wal-Mart:

3. I'm not sure why anyone would want to cover the lights with curtains or tapestries, but my best guess would be to "add ambiance". I particularly despise fluorescent lighting. It's harsh, bright, and entirely unflattering. So in the day, let the sun shine in! And at night, use accent lighting. Replace your table lamp bulb with pink-tinted bulb, which gives off a softer glow. Colored lampshades cast nice colors on the wall. Or try a multi-headed floor lamp with different colors on the heads... like this one from Target: 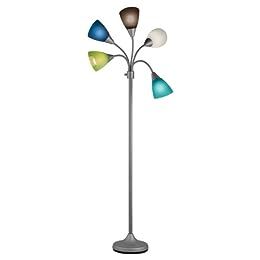 4. Yes, candlelight is lovely. There's just something about a flickering flame and the golden glow it casts in the room. I love having candles lit in my room at night, but I won't be able to do that in a dorm room. And I'm okay with that. Because while I know that I always keep an eye on candle flames... not everyone does. I don't want to go to sleep wondering if someone forgot to snuff their candle. Still feel the need for a little flickering? Modern technology has made it possible with flame free candles. I haven't yet heard of one that puts off scent... but these "fake candles" do glow. And some even flicker! These flame free candles are from Bed Bath & Beyond and are operated by remote control:

5. The only cooking appliances most colleges allow in dorms are microwaves. Don't break that rule and insist on bringing along a hot plate. There's a reason they're not allowed. If you don't feel like trudging to the dining hall for supper, there are plenty of things you can whip up with the help of a trusty microwave. With my love for ooey-gooey chocolate, Betty Crocker Warm Delights might turn out to be a college staple:

6. You really don't need to bring an iron and ironing board to school. WikiHow has an article on "How to Remove Wrinkles from Clothes Without an Iron". There are several methods: tumbling the clothing in a dryer, letting the clothing hang in a bathroom made steamy by the shower, using a blow dryer, laying a damp towel over the clothing for a while, or spritzing with water. To read the full article, click here. Or try Downy's Wrinkle Releaser spray:

Email ThisBlogThis!Share to TwitterShare to FacebookShare to Pinterest
Labels: Safety and Security