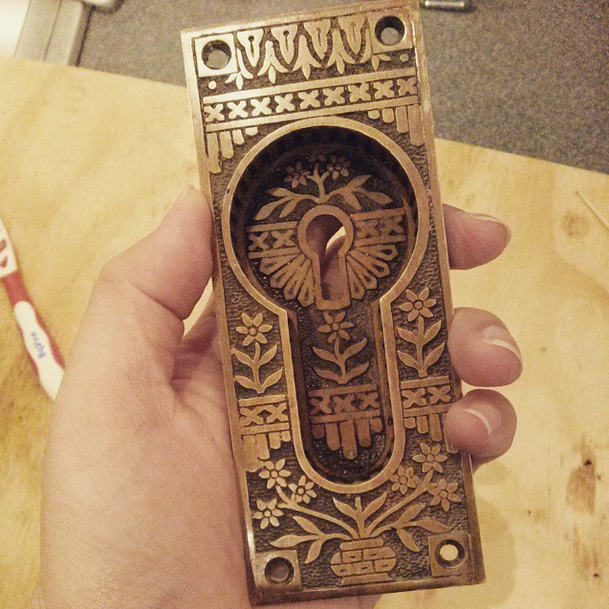 On Sunday, the boyfriend and I spent a good portion of our day binge-watching Rehab Addict on Netflix. Nicole Curtis is my hero. I love her approach to restoring old houses, her mission to keep things as original and era-appropriate as possible, and her belief that everything is worth saving. I'd love to renovate my home someday, but for now I'm a renter. Luckily, in my current rental residence, I'm allowed to make some changes. 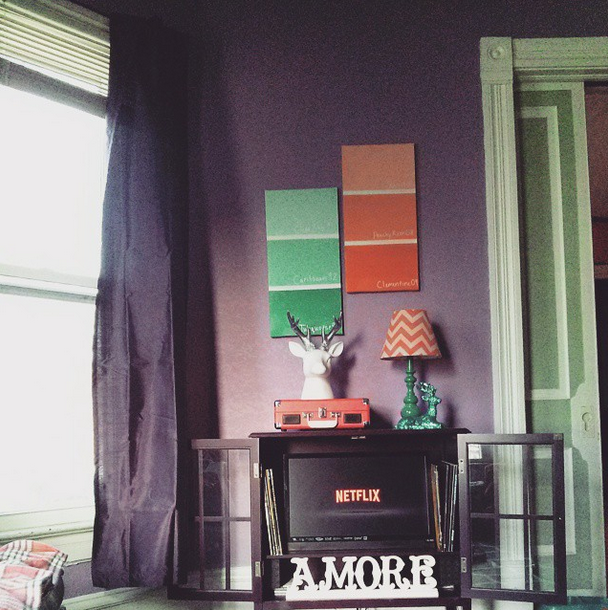 While watching our umpteenth episode of the day, I kept staring at my two sets of antique pocket doors in the living room. One of the former tenants painted them a weird shade of sagey green. It's been on my to-do list to give them a nice coat of crisp white paint. Tired of sitting on the couch, motivated by Nicole, and itching for something to DIY, I grabbed my paint brush and can of white paint and got to work. 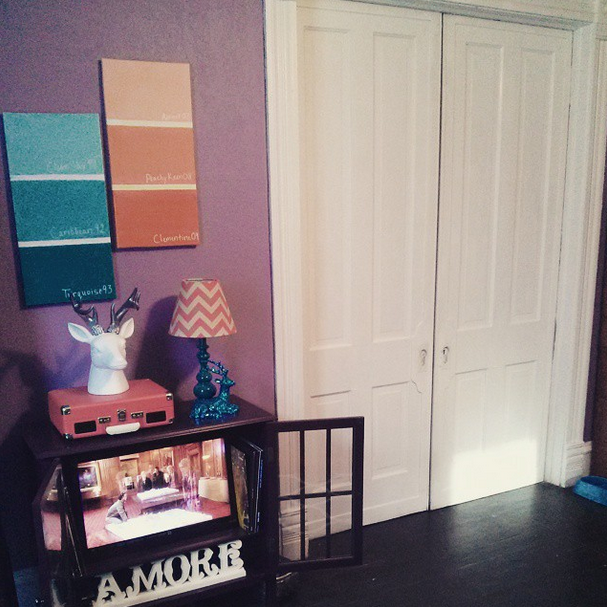 Gone are those tacky green eyesores. The green didn't match any of the colors in my space. They once horribly detracted from my decor, but now look clean and elegant with a white finish. 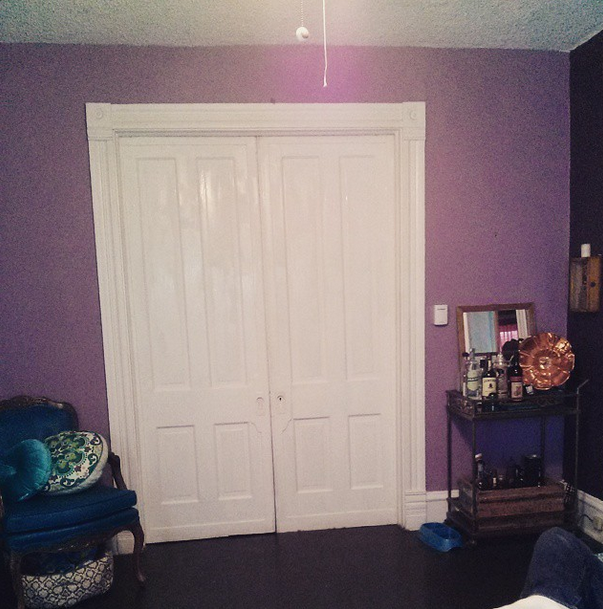 After painting the doors, I mentioned to G that I supposed I was going to paint the handles a copper color. The previous tenant had painted them white, which masked their floral details and made them disappear into the great expanse of white which is the door itself.

G took a closer look and – inspired by Nicole Curtis – decided we could remove the hardware and somehow restore them back to the original finish. I love that my man is so handy and also interested in taking on projects like this. We got online, dug up some how-to articles, and hit up Menards for our supplies (and some pizza rolls for dinner). 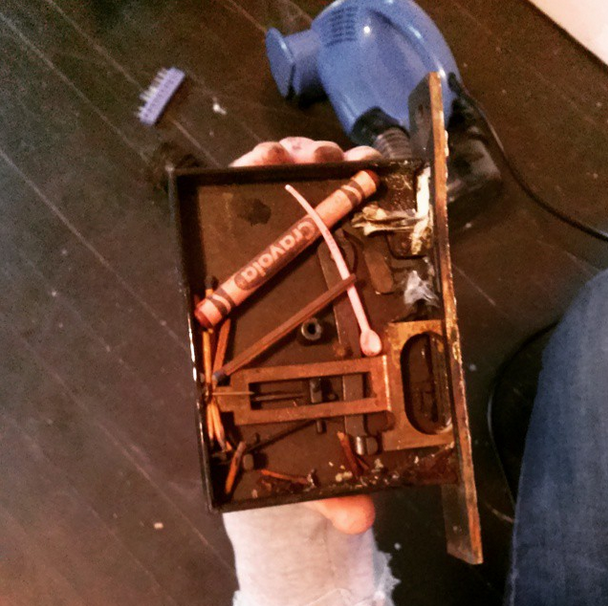 Fueled by creativity, Rehab Addict, and gin and tonics, we got to work. First, G had to carefully scrape away paint from the screws. Carefully because the screws are copper, a soft metal that we didn't want to strip or damage. Plus, these doors and their hardware are original to this 100+ house I live in. And we don't want ruining an antique on our consciences.

When G unscrewed and removed the first piece of hardware, we had a good chuckle at what we found. The thing was full of old matches, a button, a crayon, and other oddities. It's a wonder that it functioned with all those in there! 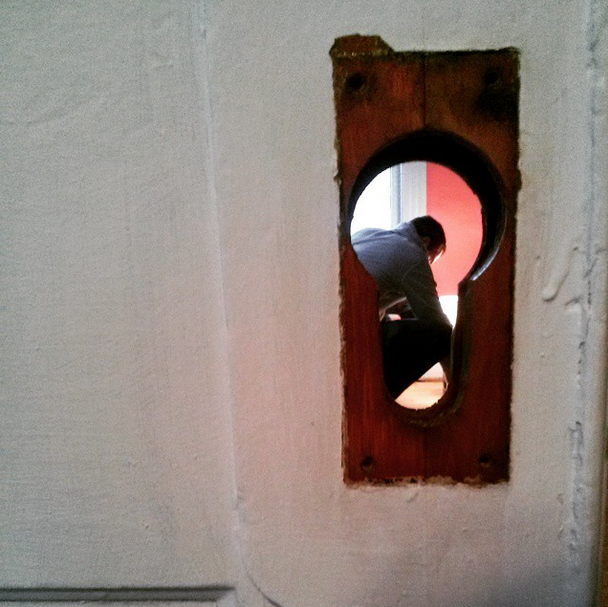 Removing the hardware revealed the beautiful wood tones of the door underneath. I was pretty bummed to see such pretty wood that someone had painted over years and years ago. If I owned this house (rather than rented the lower floor of it), I'd have the doors taken down and stripped of all paint. 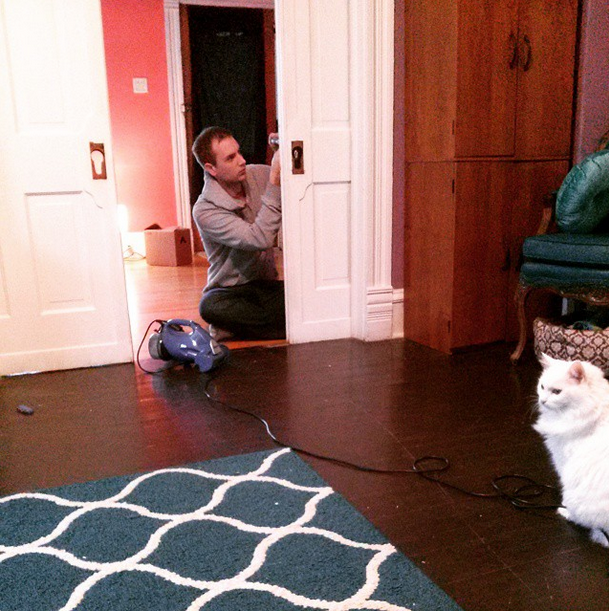 Here's G removing the other hardware – with Cotton supervising. (She was very interested in our project.) We took the Rehab Addict's advice of taking a picture of the door hardware when we took it apart. It was a pretty simple apparatus inside, but the picture helped G remember where everything was supposed to go. 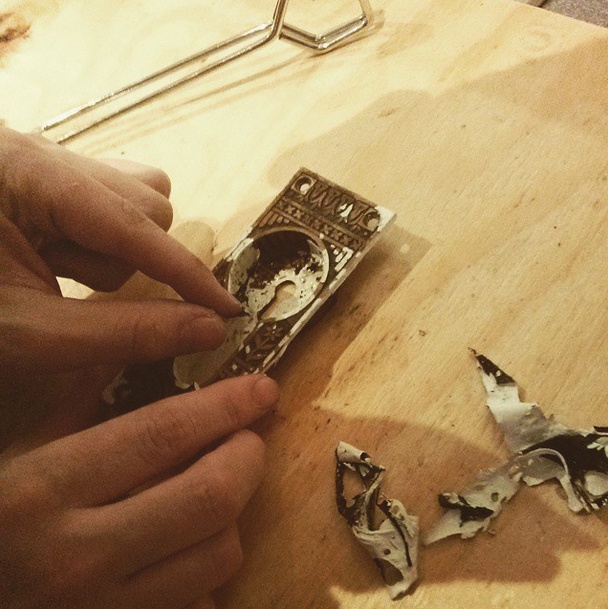 So here's what G did to restore the hardware.

1. Bring a pot of water and dish soap close to a boil on the stove. I'm not sure why you're not supposed to let it boil, but sources say don't.

2. Once source said to soak the hardware for a couple hours. We went a different route and soaked each piece for a few minutes.

3. After a few minutes of soaking in the near-boiling soapy water, remove a piece of hardware and try peeling the paint off. It may peel off all at once or it may peel off in layers – depending on the paint, how long ago it was painted, etc.

4. Use an old toothbrush to scrub away paint layers. Use a toothpick to scrape the hard-to-reach, detailed areas.

5. Repeat the soaking, peeling, scrubbing, and toothpicking as needed.

6. Dry with a towel or paper-towel. Since we're not sure what kind of metal these are made of, we were a bit concerned with rust. So we set my oven to the lowest temperature setting and popped them in there on a foil-covered cookie sheet for ten(ish) minutes. 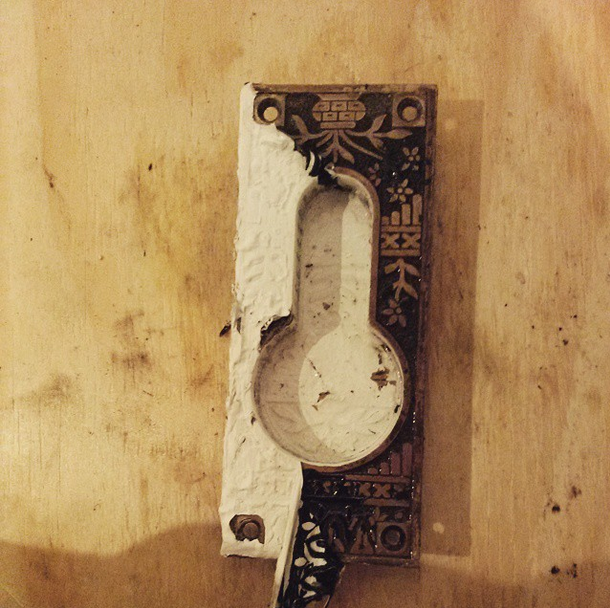 We knew these antique handles and hardware were cool, but the peeling paint revealed something more gorgeous than we ever expected. It astonishes me that anyone would paint such beautiful, ornate pieces of metal hardware white. Why cover this up?!

The few hours we spent revamping them were more than worth it. It was so simple and revealed something so special. After a big of digging around on the internet, I learned learned that these are an Eastlake Windsor style common to the Victorian era:

It's really neat to think that our hands were probably the first to touch the inside apparatus of the lock and hardware since the guy who made it or installed it over a century ago. G referenced his pictures to put these back together and return them to their spots in the freshly-painted white doors. Plus, since he greased up the interior apparatus with dry lubrication spray, they function better than they probably have in decades. And I love how the metallic brown pops against the white. 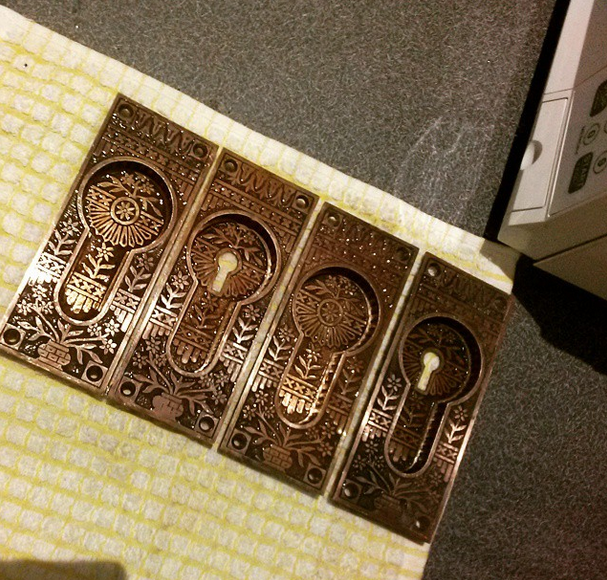 I still have some work to do on the door – especially around the hardware, but look at how lovely the brass/copper(?) looks against the white: 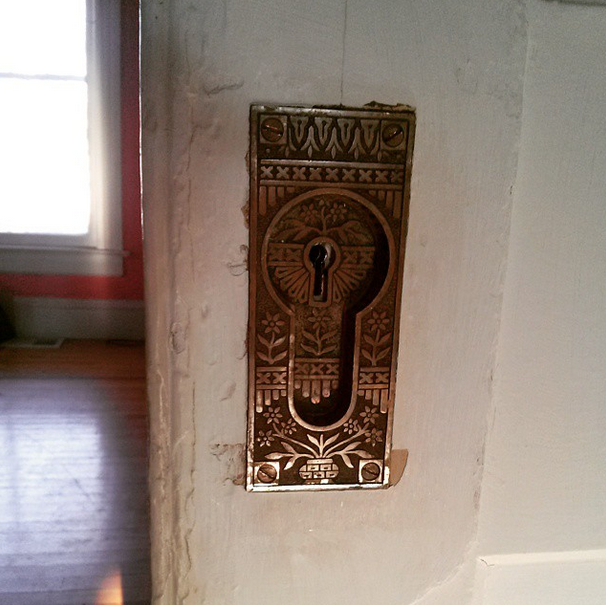 Those are absolutely beautiful! And I can totally picture some little boy poking matches through the keyhole however many years ago. Love that you were able to preserve such a beautiful piece of hardware! Can't wait to see how the rest of the pocket doors turn out! And totally jealous that you have such freedom in your rental. (Almost) makes me wish I owned my own place so I could DIY all I want. Good luck with the rest of the painting and renovations!

Rehab Addict is an awesome show, and one that has given my wife and I lots of ideas too! Thanks for sharing the wonderful photos of the hardware renovations you accomplished.

This is incredible! My house is not old like yours, but this has inspired me to make it look a little older. You guys did a great job, those handles are amazing!

It would be fun to have a house to restore these treasures buried underneath layers of paint!

Will look for hardware and construction supply paint and will work on our doors! I'm fascinated and want to work on this project asap.

If you are a gun enthusiast, you’ll most likely agree that using and reusing cases can be a cost-effective way of utilising cartridges. Brass Polishes