Design-Stumped: What should I do with this awkward corner? 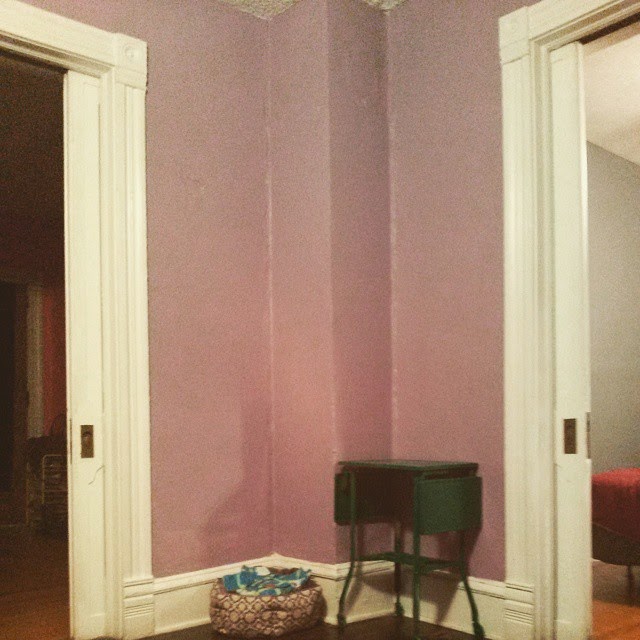 In my living room, there's this awkward little corner. It's opposite the bar cart and across the room from the television/sofa. It appears that once upon a time, there might have been some kind of burner/heater here – with the corner part being a slim chimney. But in these modern times, I just find myself staring at this awkward corner and struggling with decorating it on a daily basis.

I've put a chair there, but it's really too far from the rest of the furniture to make sense or feel cozy. I've temporarily placed my typewriter table there (above) along with one of the cat beds. Right now, it's just sitting empty.

Gallery Wall
I do like the idea of hanging an eclectic collection of photographs, prints, and artwork here, but my walls are really old plaster and I hate the thought of putting so many holes there.

Floating Shelves
It's been suggested that I hang some white floating shelves. I'm mostly on board with this idea as long as I start the shelves far enough up that the cats won't be jumping up and breaking my pretties.

I've scavenged Pinterest for photos of rooms with similar awkward corners, but it's been to no avail.

So I'm opening up the floor here on the blog.
What do you think I should do with this awkward corner?

Things to keep in mind: The cheaper and easier the idea/project, the better! ;)

I love the gallery wall idea! Would the old plaster be better off if you used double-sided strips of tape? It's heavy-duty enough to hold up your art, but easy to take off the walls when you want to move things around.

I immediately thought of this: http://www.mrkate.com/2012/03/30/diyable-corner-frames/
I love how the frames are set up to complement the corner and I think having so many angles in one corner could make a gallery wall there really pop.
Second idea: http://www.altfordamerne.dk/bolig/artikler/bolig-kreativitet-og-funktionalitet-i-skon-forening/
I love how they took simple white shelves and made it a statement piece by showcasing their camera collection. I think a set of short shelves on either side of the "chimney" would make a nice statement and maybe even out the "multi-angle" look if that's more what you're trying to do.
As far as what to do in the lower half of the corner, have you ever considered building a corner bench? It might be a little tricky to figure out all the angles, but it would be really cool if you could make it into additional storage space as well.
Hope these ideas help some! I also second the above commenter's idea to use something like command strips if you're afraid of damaging your walls. That would probably not be a good idea for shelves though, as those usually require some sort of anchor (especially if they are free-floating like the ones in the link I added).

I'm not a big fan of double-sided tape – maybe because whatever I've used in the past was disappointing. (Maybe due to the fluctuation of humidity in my often Victorian apartments, haha.)

Have you had success? What brand?

I do like the simple white shelves for displaying a collection! Hmm... I wonder what I could display without it looking too cluttered...

I do like the idea of a little bench wrapping around the corners – especially if it offered some storage!

Thanks for the suggestions!

You could probably fit two book cases either side of the corner, to turn it into a mini library. That wouldn't 't damage the walls, plus you could save shelves for decorative accents.

I would hang a longer, narrow piece of artwork on the one side (opposite the green table) and then put shelves on the other side, it will help that structural part of the wall that sticks out to blend in more. Crates as shelves are pretty cool. Or if you are musical, what about hanging some musical instruments and making it a music corner? Or what about those decorative ladders that you can hang blankets on? There may be a small version that would work well here.

Sorry, just thought of another idea. If its your living room/dining room, would it be a good spot to display a wine collection? Or have a custom built unit for wine/liquor
http://www.ikeahackers.net/2013/08/besta-wine-rack-and-liquor-cabinet.html

I like that idea! I can hardly resist a reason to stock up on MORE books. ;)

No need to apologize for sending more ideas my way! :)

I like the idea of artwork on one wall and shelves on the other – I'd get the balance without perfect symmetry, which is always more visually interesting to me.

I love the ladder idea, too! I have tons of blankets.

My liquor has a happy place nearby on the bar cart. And while I looove the idea of wine storage, I'm notorious for never holding on to a bottle of wine for long. :P Maybe I could try... just this once. :)

I see you said no room for chair and not really part of other seating. But I am too thrifty to not use what I already have. For interest and to soften the corner I would put a tall plant and then your chair with a blanket and a basket of books or magazines or knitting basket if that's your thing. Now it is a nook and yet the chair can be drawn into other seating when needed.