Bug Off! | Getting rid of unwanted guests of the 6- and 8-legged variety 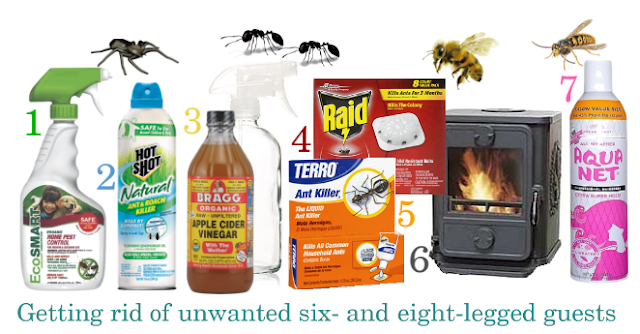 To know me is to know I'm afraid of anything with more than four legs – except butterflies. After over a month of living together in our new-to-us, 105-year-old house in a semi-rural small town... G is just finding this out. He's come home to a beetle trapped under a mason jar, fireplace wrapped in tape to keep honeybees out, and me nearly in tears because there were two wasps upstairs.

One of the biggest, scariest adventures in having our own house has been dealing with the uninvited guests. The job has mostly fallen to me since I work from home... and our house is now also my office. So far, I've been pestered by ants, spiders, bees, wasps, and a solitary beetle. And with two furry co-workers – errr, uh... cats – I want to keep my extermination methods as eco-friendly and pet-safe as possible. And I thought I'd share my product reviews and recommendations with you!

Let's get down to the creepy crawlers, shall we?

I've heard from many fellow Iowans that the ants are just bad this year. It probably doesn't help that the plant life (aka: former dwellers' landscaping) is a bit out of control outside around our house. Anyway, the ants have been a major nuisance. There are teeny, tiny fast ones that swarm out of nowhere when there's a crumb left on the counter or my cats leave wet food in their dishes. And there are big, black bold ones that crawl right over my keyboard or even on me while on the couch. Ugh! It's taken a combination of methods to finally get these guys under control.

EcoSmart Organic Home Pest Control Spray (1)
Clove oil, rosemary oil, and thyme oil are among the active ingredients. There's wintergreen oil, too. It's a strong scent and I think you'll either love it or hate it. I love it. I also love that it doesn't leave behind any harmful toxins or greasy residue – or damage surfaces. It's supposed to kill and repel "over 100 home invading pests: ants, beetles, centipedes, cockroaches, crickets, earwigs, fleas, millepedes, pantry pests, pillbugs, silverfish, spiders, sowbugs, ticks, and other crawling insect pests." That's a long list.

These two sprays perform about the same. They kill ants on contact and repel them for a day or two. Eventually, it must wear off because I have to reapply. I don't mind because I really like the smell of these.

I also used both of these on other insects. I tried the EcoSmart on a black beetle that crawled into the foyer. It didn't work. He was a hearty fellow and just kept crawling. So I resorted to plan B: putting a mason jar over him until G got home. When G got home, the little guy was still alive. Ew. I hid while G took care of him – I'm not sure if he got flushed or returned to his outdoor habitat.

Both of these will slow down a spider, but don't seem to kill. So I'd recommend spraying the spider, then squashing it. Generally, I let spiders live and do their thing – so long as they're small and stay up out of reach/out of sight. But if they're big, I call in the reinforcements (aka the boyfriend). And if they're small and try to run across my desk, I can't help but smush them.

Apple Cider Vinegar (3)
In a pinch, I've also mixed one part water with one part apple cider vinegar in a spray bottle. It's hit or miss when it comes to actually killing the ant. And it doesn't really seem to repel them for longer than a few hours. But it's supposed to wash away the scent trail ants leave behind for their buddies. And I like to use it on surfaces that come into contact with food – like the stove, fridge, and sink.

Fed up with spraying ants all day in my office, I decided to try some Raid ant baits (4). They're often peanut-based, so keep that in mind if anyone in your household has a peanut allergy. Apparently ants love peanuts? Anyway, I put them in places that my cats couldn't reach, but that I thought ants would easily find – outside the front door, under a desk, behind a radiator. I don't know how effective these were because the out-of-reach places were also out-of-sight. I sometimes saw ants on the trail to the baits. But more often than not, I found halved ants on the trail. So I think one of my cats was lying in wait to attack and disassemble the six-legged invaders. Oh well.

When the exterminator came over to inspect our bee issue (more on that later), he also sprayed around our house – indoors and out. I've definitely seen a decrease in the big black ants since he sprayed. Like, I went from seeing 20ish a day to maybe 5... and usually near the old windows and doors of the main level where it's really easy for an ant to slip in. Bonus: I've seen less spiders, too. I wasn't thrilled about the idea of an exterminator with all his chemicals, but after talking to him I learned that his spray was not toxic to pets... even if they were to lick it while it was still wet. What a relief! I felt kind of bad for being so judgy.

The spray, peanut-based baits, and bug guy were no match for the teeny tiny ants in our kitchen. G suggested I buy some Terro baits (5). It's basically a mixture of sugar water and boric acid that you drop on a small cardboard square. You could totally DIY them, but they're cheap... so I'm okay with hitting up the store for these. The ants are attracted to the sweet liquid bait. They approach it, leaving behind a nice scent trail for their buddies to follow. They ingest it, slurrrrrping it up much in the same fashion that I do chocolate milkshakes. Then they wobble (acting a little intoxicated) back to their colony, where they regurgitate it up and share it with their friends and family. (Ew. Gross, I know.) The ants that partake in the shared goodies die of a mild toxin.

G put one on the kitchen counter where these ants have been such a nuisance. (No, my cats don't jump up on the kitchen counters. And even if they did, these baits aren't supposed to be that dangerous.) It took a day or so, but the tiny ants finally took notice and started snacking. It's been strangely fascinating to watch them approach, inspect, and start chowing down. Drink up and take some home to share, little guys! (I know, that's really morbid and mean of me. But I'm soooo tired of ants.) To my delight, lately some of the big black ants have started eating on the Terro bait, too. I'm hoping they'll be extra generous in taking it back to their colony. And now that I know they're attracted to it, I'm definitely going to put out more!

We're definitely seeing less ants. Still more than I want to see. But we're getting there.

G and I get along really well, so we don't have a lot of fights. But in the three years of our relationship, there are two arguments that stand out. The first was about light bulb wattage. I don't really remember the details... all I recall is that I was definitely the wrong one, and it ended with me sheepishly asking for his help hanging a ceiling pendant. He was nice and obliged. :)

The second most serious argument occurred within the last few weeks. To my horror, I discovered not one but two wasps upstairs. Wasps, I just can't handle. I'm so afraid of getting stung. They don't die when they sting you like bees do! They can just keep on flying and stinging – that's terrifying! Anyway, I looked to Google for answers. And I found this gem of knowledge: Apparently when you spray a wasp (or any winged insect) with Aqua Net (7), the hairspray will "freeze" its wings and it won't be able to fly. It will drop and slow down, allowing you to squash it! So with my new-found Google know-how, I went out to the dollar store and got myself a can of Aqua Net – only to come home and stare down the wasps because even armed with my deadly can of 80's hairspray, I didn't have the courage to spray.

So I waited for G to come home and asked him nicely to kill the wasps. I also started to share my Aqua Net knowledge with him. He wasn't impressed. And he wasn't keen on spraying hairspray around because it would leave a sticky residue. I sympathized, I did. But I also validated my argument with the reasoning that I could clean up the residue so that there wouldn't be any stickiness left behind. It didn't win him over.

Well, I did end up trying it. (Sssh! Don't tell!) I wouldn't spray the Aqua Net around our nice wood trim or furniture or original hardwood floors... but this morning, I found a wasp hanging out in our metal kitchen sink. So I figured he was fair game. I sprayed him, squashed him with a paper towel, wadded him up, and threw him away... and then proceeded to clean the sticky residue with a little dishwater. ;)

Last but certainly not least, we recently had some bee trouble. Bees were getting in and we coudlnt' figure out how. Eventually, I saw one, then two... then a third... emerge from the woodburner in my office. We stepped outside, looked up at the chimney, and saw a swarm up there. And we knew: honeybees were coming down our chimney and out of the small crevices of the woodburner and into our home. The frequency of bees increased and we were rather alarmed that a colony could be building their hive in our chimney. Not good. Honey draws bugs – ew! Bees sting – ouch! And honeycomb is flammable – oh no! None of that is wanted in our chimney.

Unfortunately, the exterminator couldn't help us because the bees were indeed honeybees. And beekeepers weren't interested in climbing up onto our steep roof to lure bees out of our 30-feet-in-the-air chimney. And we weren't interested in a beekeeper luring them out into our living space from the woodburner. It put us in quite a predicament, until G was able to get some solid advice from a beekeeper. He said to smoke them out (6). For several days in a row, we lit a small grass fire in our woodburner and just let it smoke.

We haven't seen a bee since.

Just as I typed that, a honeybee buzzed against the screen of my bay window. From the outside. But seriously, it scared the bee-jeezus out of me.

Hopefully the honeybees found a more welcoming place to settle in.

For living in an old house in a small town in rural Iowa, I'd say we're doing pretty good keeping up with all these pests – especially since it sat empty for several months before we moved in. (I can't tell you how many of the ladybug-lookalike Asian beetles and Box Elder bugs I had to vacuum up when we moved in. Luckily, they're no longer an issue either.)

Now I'm just trying to keep my sanity. A centipede, millipede, or silverwish would probably send me over the edge at this point. So cross your fingers for me that it's good riddance to our uninvited insect guests!