If you read one book this summer, make it 'June' 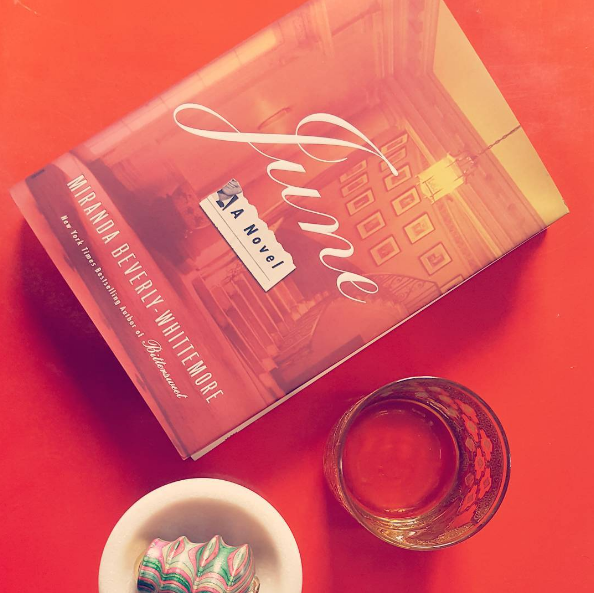 I've heard it said (and wholeheartedly agree) that a good book is like a good friend. But in this case, a good book is like a big, beautiful Victorian house that opens its doors to you, invites you to come in, offers you lemonade, and serves it up fresh with a side of decades-old secrets on pretty little plate.

I loved this book. This book being June by Miranda Beverly-Whittmore.

I stumbled across an exclusive preview of June on First to Read. A tale of suspense and passion, past and present, in rural Ohio? And a grand old house? I gave the excerpt a quick read, which happened to be the first couple chapters. I was hooked within the first few paragraphs. It was this sentence that really did it for me: "Houses don't always dream. In fact, most don't. Houses that dream are built for the ages (one or two perhaps, in every small American town)."

In June, twenty-five-year-old Cassie Danvers has inherited Two Oaks, her grandmother's crumbling mansion in small town, Ohio. She's in mourning and isolation. The roof is caving in and bills are piling up. And then: a knock on the door. And shocking, life changing news: Cassie has been named sole heir to the fortune of Jack Montgomery, a silver-screen legend. Soon enough, Jack's famous daughters Tate and Elda make the trek from Hollywood to St. Jude—on a mission for DNA and the vast inheritance. With them comes along Tate's handsome manager-type Nick and perky, pretty personal assistant Hank. For the first time in years, there's life within Two Oaks' walls—laughter, arguments, and even romance. Together, Cassie, Nick, Tate, Elda, and Hank dive into the past and discover old secrets about the summer of 1955, when the movie-makers came to town, and June met Jack, and romance led to murder and blackmail. And at the center of it all: a spunky girl named Lindie.

The story flips back and forth between a few chapters of 1955 and a few chapters of 2015. It's perfectly balanced and Beverly-Whittmore expertly weaves the perspectives and personalities of Lindie, June, and Cassie. 1955 St. Jude is bustling with the excitement of a movie crew, film set, and famous Hollywood stars, while 2015 St. Jude is a small town that's a little worn around the edges. Much of the magic has faded, but there's still an air of mystery... of things that once were, things that should have been, and things that shouldn't have.

I loved the characters. Slightly cynical Cassie, with her artistic eye for photography. Tightly-wound Nick, who can appreciate both the bygone beauty of Two Oaks and the everyday beauty of Cassie. Lovely June, who knows who she loves but not what she wants. Lindie, who knows who she loves and what she wants—and who everyone else loves, and what they should do. And at the center of it all, the most beloved character of all is the Two Oaks mansion itself. The once-proud house with its grand staircase, stately columns, and spacious, gracious rooms.

I've always wanted to read (or even write) a story in which the old house played just as big a role as the main characters. This is it. Two Oaks is one of those special houses, built by dreams and built to dream. This was the perfect time to read it to—curled up on the couch, a few months into living in our 100-year-old home with its own grand staircase, stately columns, and spacious rooms. Two Oaks reminded me of our "Mayor's Mansion." Small town, Ohio reminded me of our own small town, Iowa. And what could have happened here half a century ago.

I couldn't put this book down. I read half of it on July 4... another half throughout the weeknights that followed... and ultimately finished it up this past Sunday. I also need to rave about the cover. I know you shouldn't judge a book by one, but I find this cover irresistible with its golden glow and rosy sunset hues. It also has a lovely sheen to it... I wish you could see it in the photo! So I'd definitely recommend the pleasure of reading it in physical book form rather than e-book if you can't decide! ;)

June invites you in. From page one, it's as if you're staying in this grand old house as its guest—privy to its stories and secrets. It's such a lovely stay. And that the end, you leave happy and satisfied—and hopeful that you can come back for another visit someday.

Season:
This is definitely a summer read. Perfect for sultry, sunny days and humid nights.

Music:
Set these pages to the music of The Lumineers, Of Monsters and Men, and Horse Feathers.

Drink:
Sip on some lemonade on the rocks. Or rye whiskey—neat.

It's not very often that I finish a book and immediately almost want to re-read it. I'll definitely be looking for another book by Beverly-Whittmore—and re-reading again and recommending this one to fellow bookworms in the future. This is the type of book that makes me wish I had a book club so we ladies could read it, and then gather over mint juleps and tea sandwiches to talk about June and Jack, Lindie, Cassie, and Two Oaks.

So there you have it... If you read one book this summer, make it June by Miranda Beverly-Whittmore.

Oh, thanks for the article. I recently read this book, and I liked the paper on which it was printed. I asked a friend who works at https://duplicatorsales.net/ about paper, and he said that paper affects sales and you should choose the best one for your books.