Reunited and It Feels So Good! (My Phone and Me) 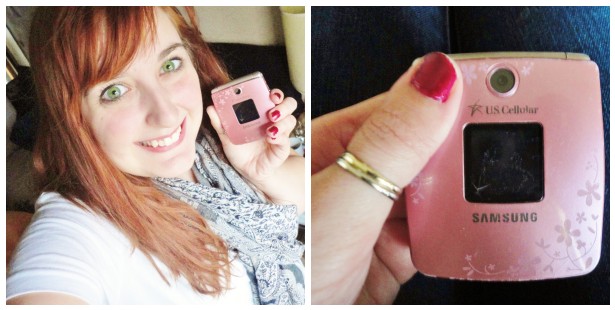 Readers, meet my lovely little pink phone.  And meet an ecstatic me with my lovely little pink phone after a near twelve hours of separation.  She's quite the looker, huh?  She may not as smart as most phones. She's a little rough around the edges from my careless handling.  Yes, that's a little crack in her screen.  ...But I seriously adore this phone.  It's small, square, pearlescent pink, flowery, and at first glance looks like a cosmetic compact.  As Emily Bronte would put it, she's "more myself than I am.  Whatever our souls are made of, his (well, hers) and mine are the same."

Last night was a cold and rainy evening.  I went out with a girlfriend.  Just down the street to a couple favorite establishments to play pool, sip on drinks, and eat something.  It was a great night and great fun!  And after all our fun, my friend drove me down the street so I wouldn't have to walk through the rain.  She stopped right out in front of my house.  I hopped out, hurried up the sidewalk, and climbed the umpteen stairs to the apartment.  Then I reached into my purse, feeling around for the likes of my lovely little phone... but she was nowhere to be found.  Oh the horror!!

Being as determined as I was, I went back out into the rain and looked all over.  Up and down the sidewalk.  In the fallen, sodden leaves. And all around my apartment.  I hopped on Fb to ask friends to call it.  I used WheresMyCellphone.com.  ...But it was all to no avail.  (And didn't help that I had it on silent anyway.)  I eventually fell asleep, hoping that I'd left the phone in a bathroom or my friend's car and that I'd get her in the morning.  I tried not to let my imagination run wild.  Had I accidentally thrown her away?  Had I dropped her in the street---to be ran over?  Had her battery died, leaving no hope even if she were found?  But my sleep was restless and plagued with a dream about a guy who found my phone, texted my friends weird stuff, and wouldn't give it back.  Haha.

This morning I trekked down the street, searching all the way.  I guess I should have waited a few hours because the places I visited last night were not yet open today.  So I walked back home and sat down at the computer.  I used an online text messaging thing to send out a message to my phone with my address should anyone happen to find it before the battery would die.  Then I messaged my mom and sister something like "I lost my phone and I think it's gone forever and I don't know what to do.  Sad face."

Shortly after, I heard a light knock.  I jumped up and ran down to my door, swinging it open.  Nobody there.  A man peeked around the corner at the foot of the stairs.  "Did you knock on my door?" I asked.  "Not yet," he said.  Then he explained he was the maintenance guy and was checking our furnace and stuff.  So I sloughed back upstairs and started exploring my options online, coming the sad conclusion that I'd probably have to upgrade and get a new phone.  (I know, I know... You're probably wondering how I can be so attached to such an archaic little device with no internet connection and not even instagram.  I'm not sure why I'm so attached.  But this separation only confirmed my attachment.  Absence makes the heart fonder.)

Then.  A knock at the door.  I figured it was the maintenance guy so I took my time getting there.  I opened the door and there stood a guy.  And he was holding out his hand.  And in his hand was my precious little pink phone!  I could have hugged him!  Maybe even kissed him!  (I should have because he was cute, too!)  But all I could manage was to thank him profusely and repeatedly and call him my hero.  He'd found the phone on his way to class this morning.  Just sitting there on the sidewalk.  I must have missed it in the dark last night.  And he probably went to class earlier than I took my walk this morning.

So my little pink phone survived the cold and wet last night!  (She's fallen in a full sink of water before, too, so she's a trooper.)  I messaged my mom and sister that the phone  had been returned to me.  My sister called shortly after and said that Felipe (my hero) had called mom this morning when he found it on his way to class.  And then he got the text with my address and the instructions to call my friend.  He called her.  And then he delivered my little lovely right to my door, literally on the brink of my phone's death.  (She's charging now.)

So that's my story for the day!  Definitely not what I had planned for a blog post, but I had to share.

Email ThisBlogThis!Share to TwitterShare to FacebookShare to Pinterest
Labels: Life as I Know It

I have the same phone in Gold! and I too recently lost it but it was recovered. I know the pain, its just too cute to give up

I have the same phone in Gold!

Great story! :) PS that phone is totally cute, I'd trade my dumb iphone in for a little square one like that any day! Well, maybe not, I've gotten pretty attached to instagram... :)

Such a funny story, happy you got it back! You should have got Felipe's number. Sounds like a hottie tottie

What a cute story! Good thing it had a happy ending! :)


Thank you so much for sharing this great blog.Very inspiring and
helpful too.Hope you continue to share more of your ideas.
I will definitely love to read.