Go Out on a Limb | Meetup & Making New Friends 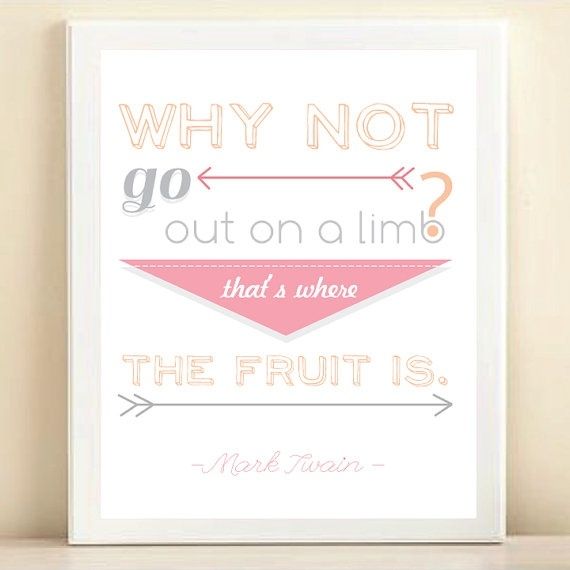 Go out on a limb. That's where the fruit is.

Since ringing in 2013, I've been going out on a lot of limbs. And there's been some juicy, delicious fruit out on the tips of those branches. I told a friend and long-time crush that I adored him - and turns out, we make a pretty great couple. I interviewed for a job position two hours away - and I here I am relocated to Eastern Iowa working at a full-time job I enjoy going to bright and early every morning. Some branches have been more shaky than others - like finding my own apartment. But overall, I've been quite blessed with the tree I'm climbing. Now it's time to go out on another limb: making friends.

Making friends in high school - at least if you'd grown up in my small hometown - didn't require much effort. And making friends in college was beautifully random. One good girlfriend I met at the bus stop outside my apartment. Another girlfriend I met during my summer internship at Meredith. And a whole slue of friends came from a relationship that didn't work out. (Ditched the bad boyfriend... ended up with a group of good friends.) Not only was making friends and meeting people in Ames a piece of cake, but so was maintaining those friendships. I lived a couple blocks down from our favorite bars and restaurants. Almost every night of the week, there was someone to go hang out with if I was feeling social.

That's another thing: the feeling social part. I like to go out and have a good time. I like friends. (Who doesn't?) But I'm introvert at my core. Not in the shy way. In a very self-reliant, self-indulgent kinda way. I don't mind being alone - in fact, I love it. And I need it, too, in order to thrive creatively. Blogging, writing, reading, crafting, decorating, rearranging... those things all flourish best when I get my alone time. (Well, maybe except for when I'm rearranging heavy furniture.) I don't really get lonely. I can sit at home every night of the week by myself, entertaining myself, and hardly notice that I haven't had much social interaction. And that's ok. That's me. I'm more likely to miss my boyfriend and family than feeling like friendship is missing.

But of course, I do want friends. And making friends in the young professional world - in a brand new city - is a whole different type of limb to go out on. I know no one here. And while I love that I'm a whole lot closer to the bf... he's still forty minutes away. And while the girls that sit around me at work are lovely young ladies that will most likely become friends - we all have varying work schedules. By the time they're getting off work, I'm crawling into bed in order to get up and be at work by 7 in the AM. Additionally, if you hang out with people from work you usually end up talking about work. Getting off work to go talk about work and then go back to work in the morning isn't ideal.

One night, I found myself wondering how on earth I was ever going to make friends in this new town. I thought, "If only there were a website kinda like online dating but for making friends and taking part in activities." (But, you know, less shady than Craigslist.) And lo and behold... there is. It's called MeetUp.com and you might have heard of it. It's the world's largest network of local groups. You find your city, select your interests, and are presented with groups other locals have started. Book clubs, business networking groups, outdoorsy adventure groups... they're all there.  Browsing the tons of interest-based groups in the area was easy. So was joining a group. Even clicking "yes" to RSVP to a meetup group event was painless.

Actually going to the meetup - now that's going out on a limb.

Tonight I'm going to a meetup for young professionals in their 20s and 30s. We're meeting at a restaurant/bar I've been dying to check out. We're having dinner and drinks. We're meeting new people. And the nervousness is starting to set in. A weird kind of nervous. Not a "Will they like me?" type of nervousness. Because, well, I've reached a certain level of self acceptance. If someone doesn't like me, that's ok. Someone else will. The people already in my life do.

I guess it's an exciting sort of nervousness. The sort where new possibilities and new faces and new conversation abound. And I love new. I love change. (Thank goodness because otherwise this would have been one of the most difficult transitions of my life.)

I have to go figure out what I'm going to wear now. But I'll let you know how it goes. :)

What about you? Have you turned to the internet for making new friends - Meetup.com or something else? Do you go about meeting people in a more old fashioned way?It's a strange time we live in - where even when you want people to meet up with physically for drinks, supper, coffee, etc... you turn to the web first.

Email ThisBlogThis!Share to TwitterShare to FacebookShare to Pinterest
Labels: Friends and Fun