How To: Thaw (and Prevent) Frozen Pipes 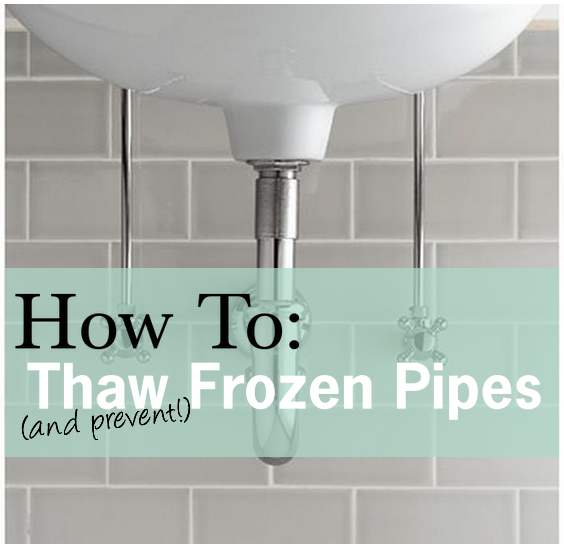 Negative 20-degree temps (and negative 40-degree wind chills) have made the last few days quite miserable here in Iowa. Breathtaking frigid air. Numb noses, fingers, and toes. Dead car batteries. And frozen pipes. Yesterday when I came home from work, I decided to tackle my sink full of dishes from the weekend. But instead, I found myself tackling the challenge of frozen pipes.

The first sign your pipes are frozen: only a trickle of water or no water at all. In my case, water wasn't coming out at all. Neither the hot nor the cold. Not even a drip. Thanks to being centrally located in the house I rent, my bathroom sink and tub worked just fine. But the kitchen sink water pipes are located in a stairwell leading up to my 2nd floor apartment. Since the stairwell gets chilly, I usually close the door at the top of the stairs to keep the cold out. Bad idea. The pipes might as well be outside. Those water pipes sat in arctic temps all day. I called my landlord right away, but he wasn't in too big of a hurry to call a plumber. So I was on my own.

A few Google searches, some baking, and six hours later... my kitchen sink pipes thawed and I have running water. Here's how I got there:

1. Warm It Up
If you can, crank up your heat. If you don't have control over your thermostat (or have antique radiators like me), try to circulate the heat. Each room in my apartment has a radiator, so I opened all the interior doors – including the one leading to my stairs – to try to get hot air out into the cold stairwell. I also placed a fan in front of the radiator in my living room / kitchen to blow some of the heat toward both my sink and the stairwell

2. Open the Cabinets
The sink and cabinets are located on the wall shared with the stairwell, so the closed cabinet doors were only keeping a bunch of cold underneath the sink. Not good for the pipes. I opened the cabinets up wide so that the blowing hot air could get in. Open the lower cabinet doors that house your sink and its pipes. Let them get some of that warm air from your cranked up heat!

3. Turn It On
Turn on both the hot and cold water (even especially if nothing is coming out) so that when the ice does begin to melt, the water will be able to drip out. This also lets out any steam that comes off the ice as it melts. If the water / steam doesn't have anywhere to go, this can contribute to cracking the pipe. And cracked pipes means big leaks, flooding, water damage, and even mold.

4. Blow-Dry
Grab your hairdryer, turn it on high heat, and aim it just inches from the faucet and pipes you think are frozen.  This is assuming you can get to those pipes. Mine were under the sink and exposed in the stairwell. If your pipes are located inside the wall, you'll need to contact your landlord so he can call in a plumber. I alternated between heating the faucet and the pipes under the sink. Eventually, a drip started. And by eventually, it took a good hour or so. So be patient and persevere.

5. Bake Yum-Yums
When I got tired of blow-drying pipes and I felt like heat was starting to circulate in the apartment, I whipped up some pistachio banana muffins. I did this for several reasons. A: Any little extra heat (especially when you're like me without a thermostat to crank up) will help. B: I was getting the munchies and it was too frigid to hit up the grocery store. C: It helped to pass the time while I waited for the faucet to drip.

Eventually, the drip became a steady little ribbon of water. Then a stream. Then a burst of gushing water. Sadly, it again subsided to a stream and then a drip. It dripped for hours – except for an occasional burst or two. (Must have been chunks of ice in there.) Five hours and two devoured muffins later, I finally got running water.

I must confess that I'm pretty proud of myself for thawing those pipes. (Here's to hoping they stay thawed!) There are some things that you shouldn't do. Some that I came across, and some that I had to learn.

1. Don't Turn It Off
Once you get your water to a trickle, don't turn off the faucets and forget about it. The threat isn't gone – especially if it's still frigid outside. Leave a trickle from both the hot and cold. This will hopefully prevent the pipes from freezing again. (I even turned on a trickle in my bathroom sink and bathtub just to be safe.) I consider a trickle to be just a smidgen more than a drip, but less than a drizzle or thin stream. It does not hurt to leave faucets drip. Plus, it'll be less water consumption when you get the bill later on.

2. Don't Bundle Up
Your pipes, that is. When I get chilly, I wrap myself burrito-style in fuzzy blankets. Something in me thought it'd be a good idea to wrap the pipes in the stairwell up with a spare blanket. Good thing I was on the phone with my oh-so-handy-and-smart boyfriend. He advised me not to wrap up the pipes. Covering them up will only keep the cold in. Leave them open and unobstructed so that the heat can get to them. (Just like leaving the lower cabinet doors open under the sink.)

3. Don't Fake Bake
Throwing in a frozen pizza or baking some goodies while you wait to generate a little extra heat is fine, but don't turn on your oven for the sole purpose of using it as an extra heater. This can be dangerous – a fire hazard and a gas hazard. Only turn on the oven if you're using it to cook, bake, etc.

4. Don't Cool Off
To prevent the pipes from freezing (or re-freezing), keep the heat up. You might be used to turning the thermostat down while you're away at work or asleep at night, but resist this habit when below-freezing temperatures are putting pipes at risk. Don't go away for a weekend (or holiday break) and turn down your heat too far. If your pipes freeze while you're away, disaster could strike without you even knowing. And lastly, never turn off your heat when you're away from home! I've heard of so many students doing this in their apartments when they leave for winter break and causing pipes to freeze and burst. Leave the heat on. Paying for a slightly higher heat bill is better than paying for water damage.

I briefly went into panic mode when I discovered my frozen pipes, but all turned out well. (And I can only hope that my little trickles of water will prevent the pipes freezing during the negative 20-degree temps today!) Sometimes a professional is still needed. The pipes might not be accessible to you (in a wall or outside). The pipes may have cracked already. Or maybe you don't have a hairdryer...

If you rent, always contact your landlord or property manager first. They should be the one to get a plumber over. If your pipe bursts or something starts to leak, call your landlord right away. (Or a plumber if you can't reach the landlord, since this would be an emergency.) Also, make sure you have renters' insurance. Your pipes could burst – or your neighbors' pipes – without you or them home to do anything about it or move anything out of the way of flooding waters.

Are you experiencing the deep freeze in the Midwest, like me? Are you snowed in out on the East Coast? Or are you lounging somewhere beautiful, warm, and tropical right now?

For additional reading, here are some extra resources on preventing and thawing frozen pipes:

• Prevent Your Pipes from Freezing | BrightNest

• How to Fix Pipes | HowStuffWorks