To paint or not to paint (my mid-century modern dresser)? 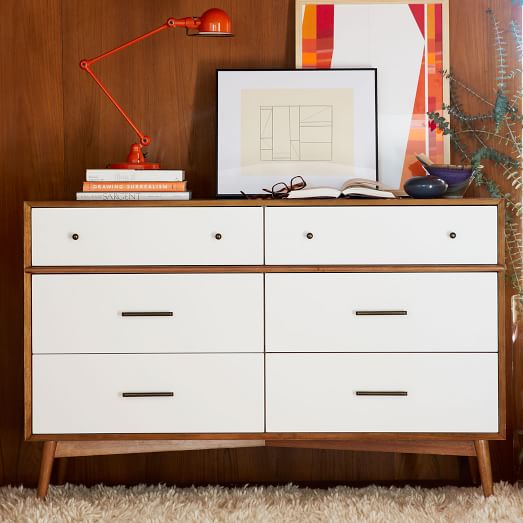 What do you think of this dresser from West Elm? I love the clean lines and the combination of natural wood tones against crisp white. I'm not so much a fan of the hardware and drawer pulls – something metallic or eclectic would be more my style. But I'm contemplating making over my own mid-century modern dresser to look like this West Elm beauty. 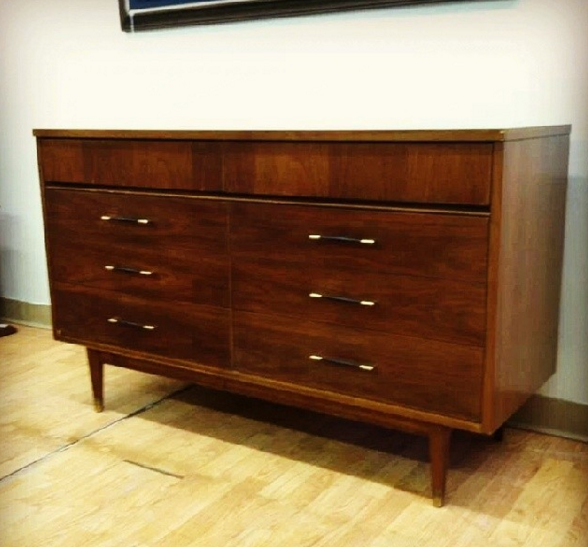 So this is my handsome dresser. I got it when I lived in my last place because I was really feeling a switch from French provincial to mid-century modern. And I love it, I do. We've had some good times, some great storage – and it looked great when my bedroom was in the larger room in my new place. But now that I've moved my bedroom into a smaller room, the dresser feels huge! And it looks so dark. And heavy.

I've listed it on Craigslist, but it's not selling. And if it doesn't sell, I'm stuck with it. (I promised myself not to buy a new, smaller dresser unless I sold this one first.)

So my dilemma is that I'm decided what to do if I have to keep it. I can deal with the size, but it's the look I've tired of. I'm seriously contemplating painting the fronts of the drawers. They're wood veneer and in need of some repairs or a refinishing anyway. 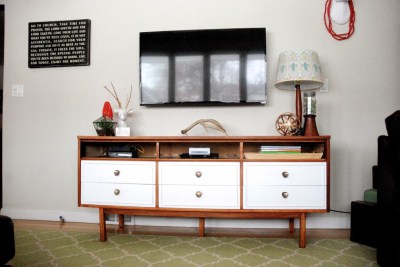 Jess over at Bright Green Door, also found herself inspired by the West Elm dresser and turned her own mid-century modern chest of drawers into a media console. Painting the fronts of the drawers and removing the top three makes it look so much less "heavy." 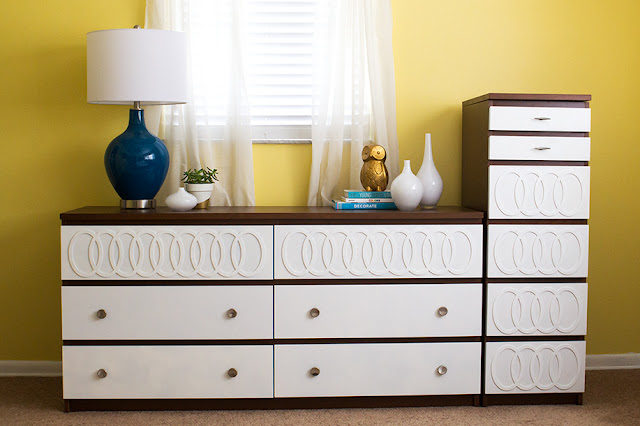 Sarah at Sarah Hearts transformed an Ikea Malm dresser into unique piece using overlays and paint. Maybe this would help me girly it up just a little, too? (And I wish I had such self control as to keep the dresser top clutter to such a bare minimum!) 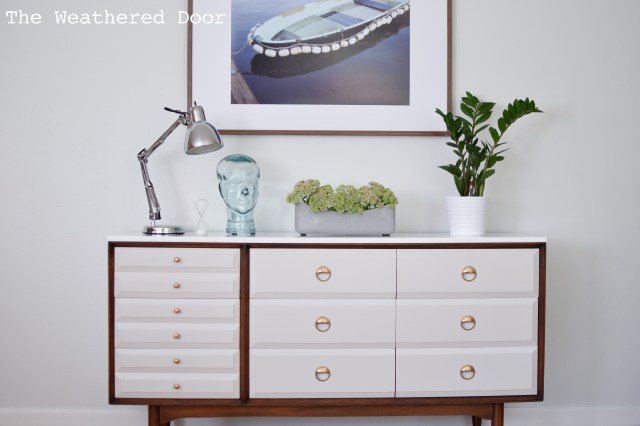 Here's another example accomplished by Reeves at The Weathered Door. I wouldn't want to paint the top of my dresser as it's such a beautiful, lustrous surface – and in the best shape! ...But I really love the gold hardware she chose. 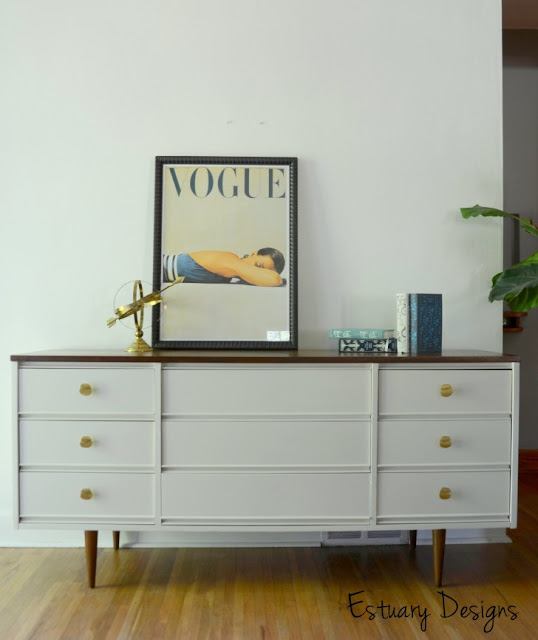 Meg from Estuary Designs did an awesome job revamping this mid-century modern dresser with white paint and gold knobs. 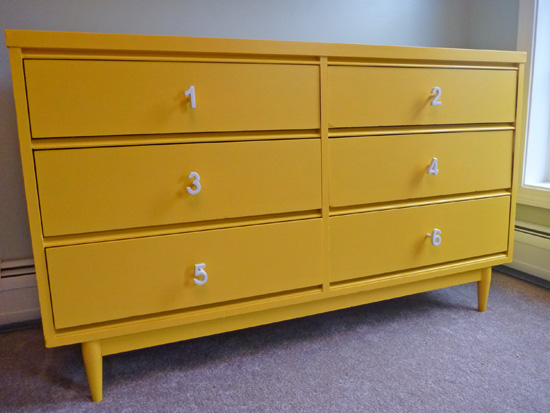 However, the more I look at all the white + wood, the more sleek and modern it feels to me. I like to look at it, but I have a feeling that I would tire of it and end up wanting to try to sell or make it over in another way. Maybe I should just go all-in like Erin at Domestic Adventure did – she painted an entire mid-century modern dresser bright golden-yellow for her nursery. I'd skip the 1-2-3 hardware and opt for something metallic or sparkly. 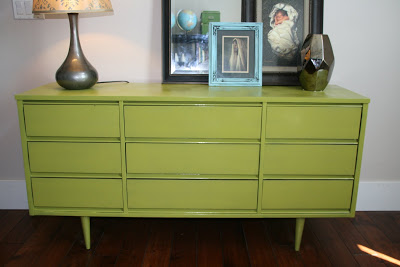 Erika at Retropolitan painted her mid-century modern dresser with the brightest spray paint she could find, but then tired of it and gave it this makeover... 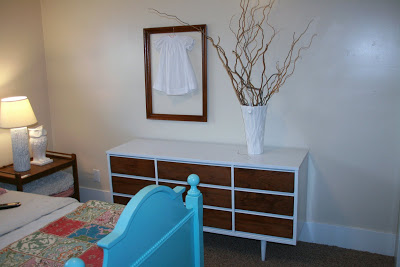 ...with the outside being white and the drawers being brown/wood. 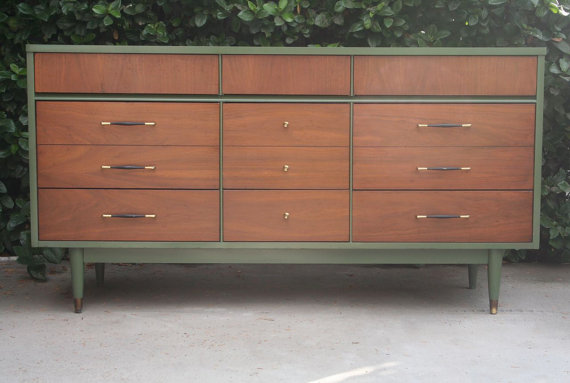 Monica at Decorating Insanity gave hers a fresh look by painting the outside of the dresser a fern green and leaving the drawers with their wood tone. Again, I don't want to paint the top of sides of mines since they're in great shape and it's the drawers that need covered up... but maybe a color like this would work well? (BTW, that dresser is sooo similar to mine!)

This is my new inspiration board for my bedroom, which I'll be painting very dark charcoal or black in the next few weeks and will share the details of in an upcoming post. In the inspiration board, I envisioned a taller, skinnier little dresser as opposed to the big, long mid-century modern one. (It would save on a lot of floor space.) But I like to work with what I have. And if the dresser doesn't sell soon, I'm just going to keep it. 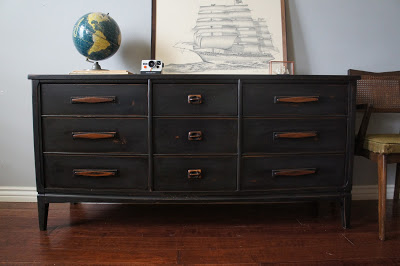 Or maybe I should paint the dresser a distressed black, too, and amp up the rustic/industrial look with some aged copper hardware? This might be a contender... (European Paint Finishes)

What do you think? Paint the drawers white? Paint them a color? Paint the whole thing? Sit tight and get the thing sold?

Have you ever struggled with a piece of furniture? Sometimes I can be so indecisive.

I've been struggling with the same decision over my mid-century modern desk! There are a couple of splintered/chipped corners on two of the drawers and painting the piece would cover it right up. I'm just so hesitant to paint a great piece of antique furniture and possibly ruining it. Can't wait to see what you end up deciding to do. Sorry, I've been now help. LOL.

Yes! The splintered/chipped corners are what is making me consider painting mine, too – besides looking so big and heavy. I know that if I painted it, I'd be okay with it. Mid-century dressers are actually pretty easy to come by these days. ...But what if I decide to sell it and nobody wants it?! ...Although, it appears nobody wants to buy it off me right now either. Haha.

We have served the needs of our customers all around London and have shown our commitment to ensuring their needs and the needs of their projects are met and exceeded. Visit our website today - Furniture Spraying

Once you’re finished measuring, you can get a better feel for how everything will fit by drafting a plan of how you’ll arrange your room’s layout and the furniture you want to add. conscious-cubby.com

Chairs, tables, screens, cabinets – all of our pieces are hand-crafted to your specifications and adorned with the mesmerizing floral and geometric motifs that infuse the Moroccan furniture.