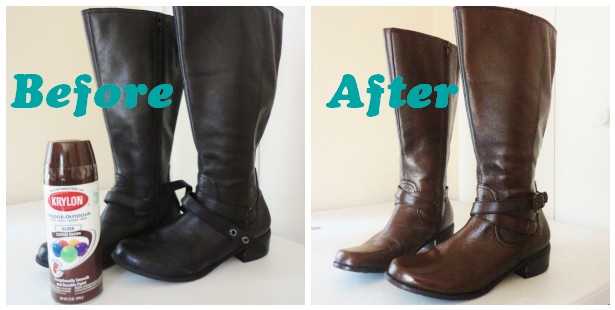 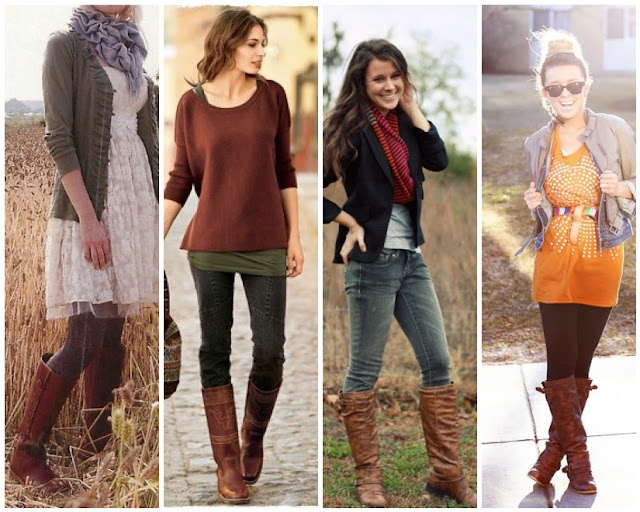 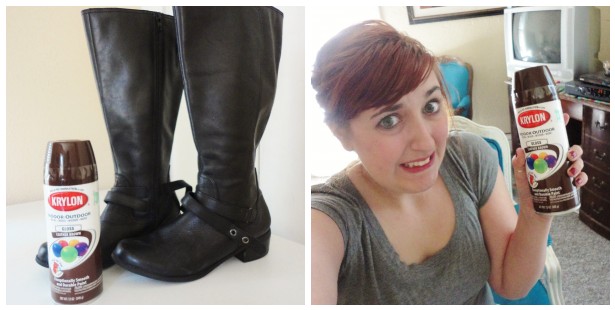 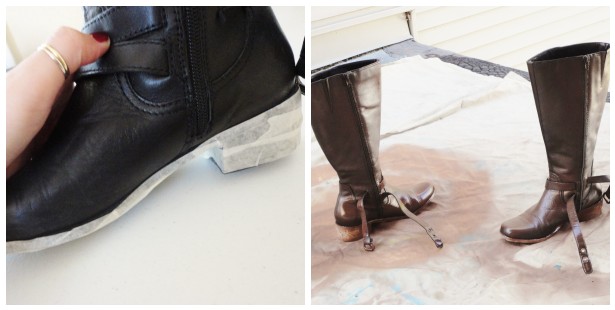 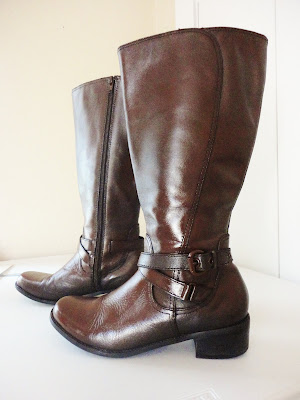 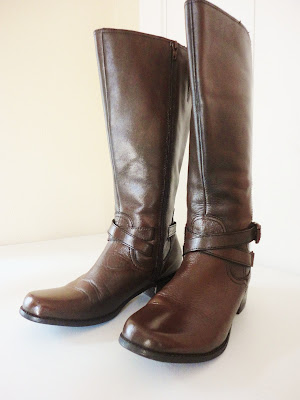 Scary! They look great, but I wonder how they'll hold up? I spray-painted a pair of leather wedges purple so I could wear them to wedding-related events way back when, and since I didn't spray on a coat of primer the paint cracked away really unattractively on 'em... I was so sad because I did a heckuva job with them! I now swear by spray primer--it's the best.

Oh no! So sad about your purple wedges. :( Hopefully my boots at least hold up for the warm, dry days of an Iowa fall---which probably won't be very long. ;)

Those are so cute! I never would have known they were spray painted. What a good idea. :)

Wow! The boots looked good as black, but they look even better brown. That's a cool project. :)

I'm wondering how they are holding up now that it's been a couple of months? My 12 year old daughter needs go go boots for her school musical, and I found some at the thrift store for really cheap. They are brown, and I would like white ones, but I don't want to ruin them and have to hunt for a new pair if it doesn't work out.

I'm wondering how they are holding up now that it's been a couple of months? My 12 year old daughter needs go go boots for her school musical, and I found some at the thrift store for really cheap. They are brown, and I would like white ones, but I don't want to ruin them and have to hunt for a new pair if it doesn't work out.

Wow, the boots are looking great after painting. Thanks for sharing with us.

You really gave new life to those boots, awesome job. Wish more people would do this instead of buying new ones.

They look so cute. That's a very good idea. Thanks for sharing your experiences.

You know this would probably work also for some of my work boots. Thanks for the tips.

Girl, I love it and thanks for the tip! I have every boot color except gray and red and now as of today I would have gray and red at the low cost of 9 bucks, LOL! LOVE THE IDEA

I learned the hard way not to wear my favorite tall black boots when spray painting a bookshelf turquoise on a windy day. My boots now look like they have a bit of turquoise sparkle to them. Thankfully, it’s no longer boot season

I had the same look on my face when I chucked my old leather jacket inside the washing machine - yep, I washed my leather jacket, LOL! Anyway, I think it turned out great! Did the color washed off eventually?

Haha!
The color never washed off. I wore these for several more fall/winter seasons and they stayed a nice, perfectly-worn brown. :) I eventually had to throw them out because the heel got worn out. ;)

Thank you very much for this excellent information.!!!
i really appreciated, keep it up !
check list of SPRAYER OF THE MARKET

I need a pair of black kitten heel boots. I don’t wear my rose gold ones from free people anymore and that’s exactly what I will do!
Thank you!

What a great idea! I never would have known they were spray painted! Thank you for sharing the post!

Women's paddock boots I admire this article for the well-researched content and excellent wording. I got so involved in this material that I couldn’t stop reading. I am impressed with your work and skill. Thank you so much.

Applying mink oil to your leather boots can soften them and make them more comfortable to wear. Your leather boots will feel softer if you wear mink boots. Visit our website, though, if you're looking to acquire the finest mink oil for boots.