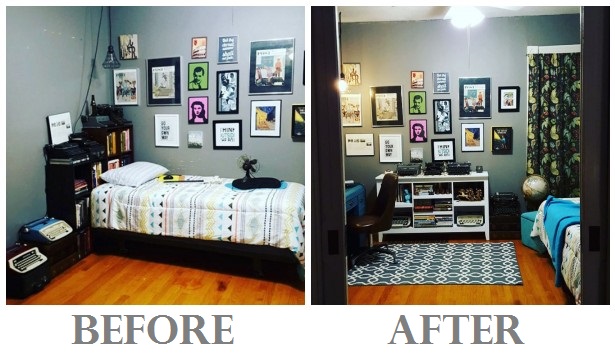 I recently posted about the struggle that has been decorating my office/guest-room – brought on by the pesky floor vent that needed to be uncovered for the cooler months to allow the furnace to intake all the air it needs. 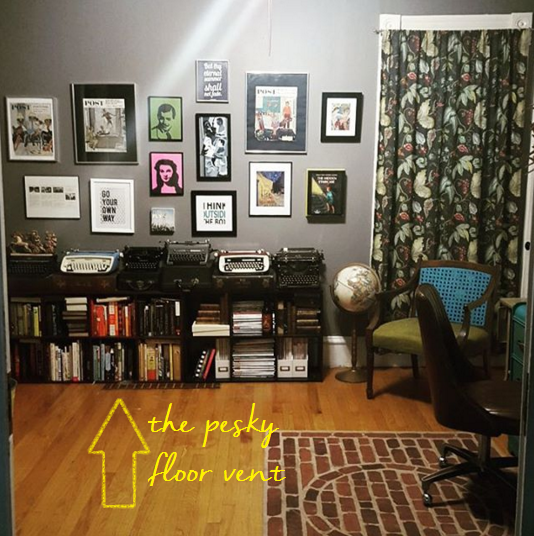 ^Here's the pesky floor vent. I really liked my office set up like this. It was easy to move my desk over to the left, and put the twin spare bed on the right – mostly out of sight from the living room. But alas, 'twas not meant to be. 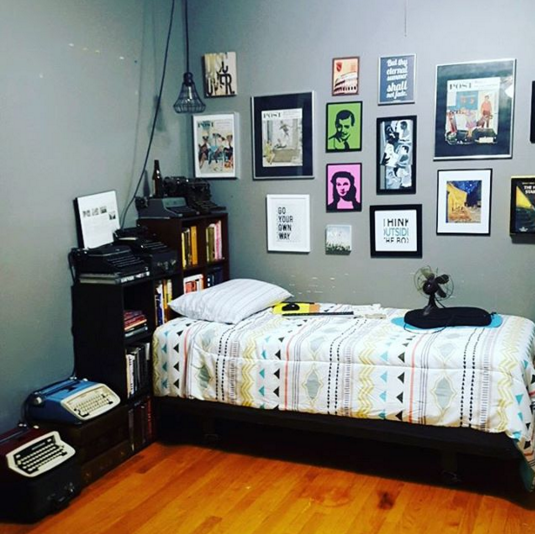 Due to the floor vent and electrical outlet placement, I was pretty much forced to do ^this. I was not a fan of 1) staggering the bookcases like that, and 2) putting the bed front and center under my gallery wall. This arrangement bothered me for days. 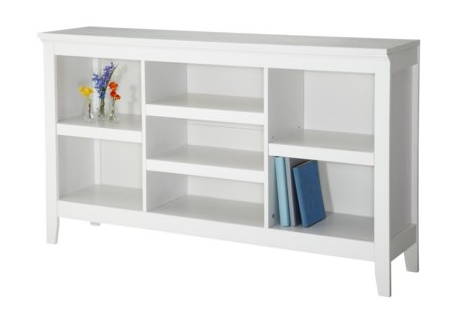 Then I scored a 20%-off deal on Target's Threshold Carson Horizontal Bookcase. I originally wanted the rustic finish. Apparently everyone else did, too, because it was sold out. So I opted for white. I'm not a fan of white walls, but I love white furniture – especially in dark rooms with wood floors and white trims. Plus, white furniture is versatile and easy to touch-up if it gets scratched or nicked. We spent 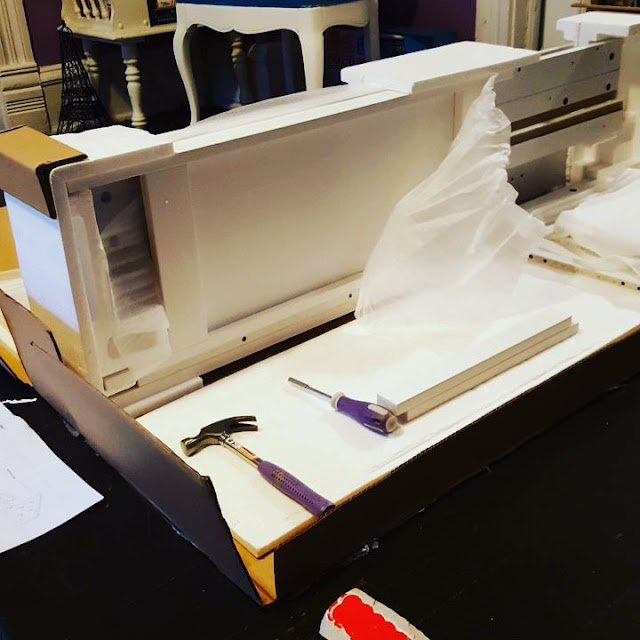 We spent Halloween afternoon putting the bookcase together. Or, rather... Greg spent the afternoon putting the bookcase together while I sipped on an old fashioned and watched Bones. ;) I was a little worried about the reviews, but I calmed down by reminding myself that my television stand is a Threshold piece from Target and I put it together myself. The bookcase went together easily. No damage, no missing parts, no trouble. 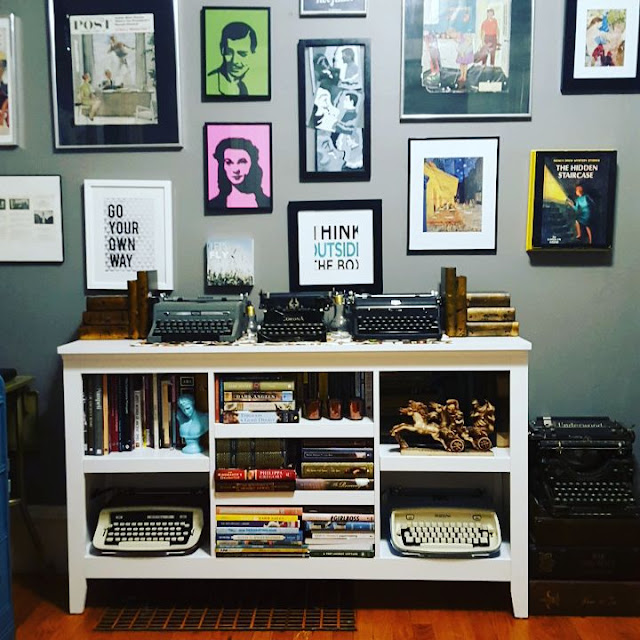 ^Here it is while I was still experimenting with what to put on it. It's obvious that I'm still going to have to downsize my book collection. (Those two lower, middle shelves are two-books-deep.) But I've been needing a reason to de-clutter for a while now.

Notice how the air vent has room to suck in all the air it needs for the furnace! Yay! 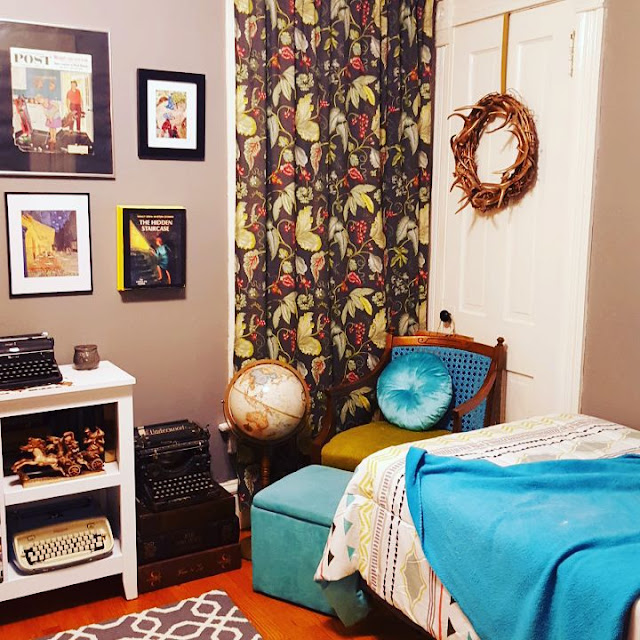 The bed got moved over to the wall that allows it to be hidden from the living room (for the most part). I brought in the chair from my bedroom and an ottoman that I've had since college. 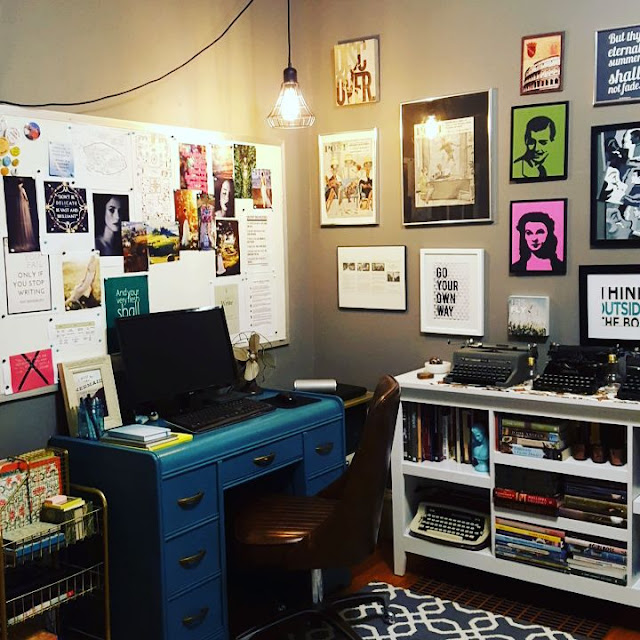 On the other side of the room, you'll find my desk, inspiration board, etc. 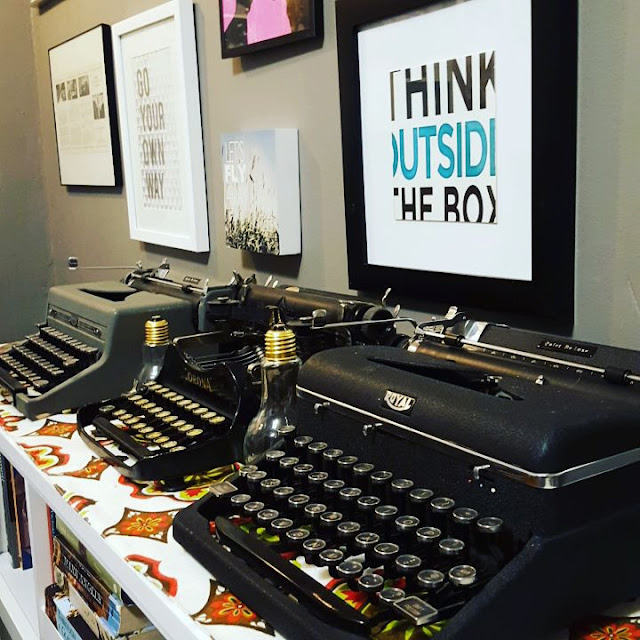 Some of my typewriters on display on top of the bookcase. 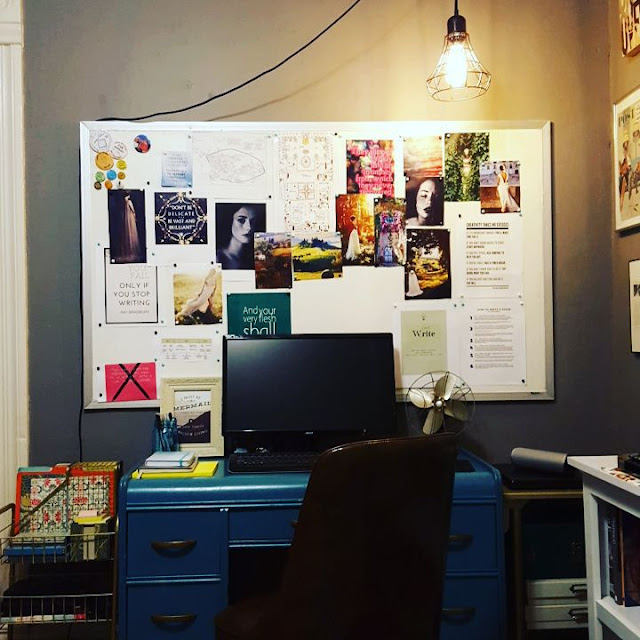 Where the magic happens. (Errr, where the hours of Pinterest happen.) 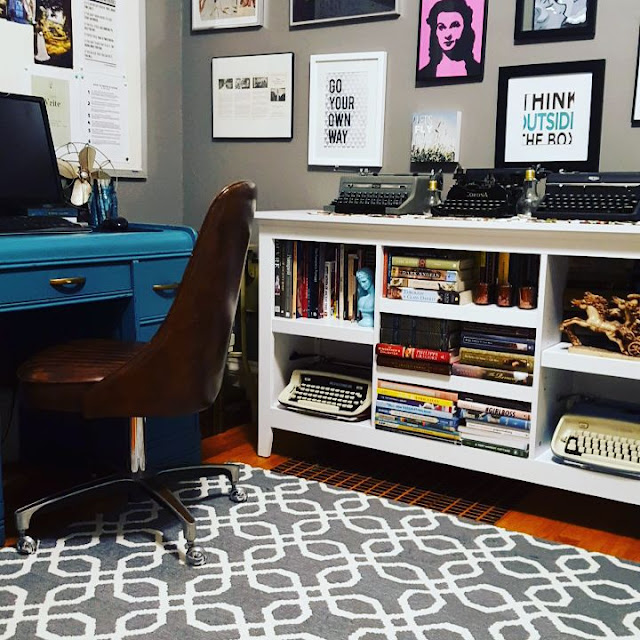 I also moved my brick rug to the kitchen and put down this one – it's also Threshold for Target. 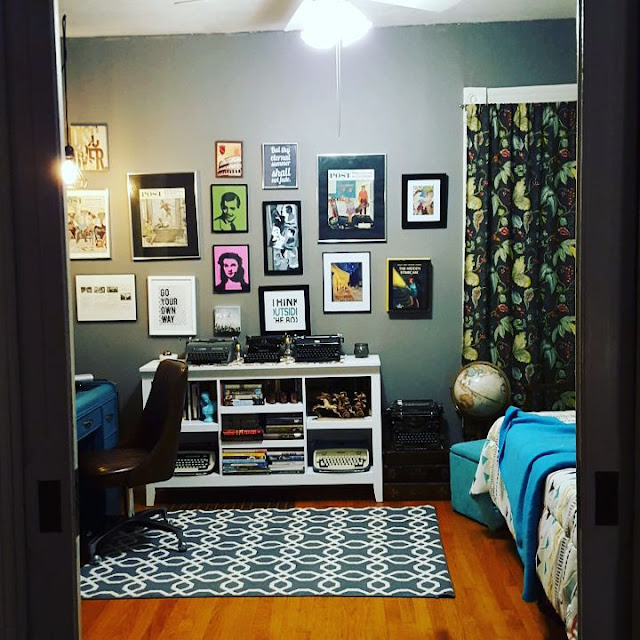 Here's the view from the living room through the double pocket doors, which I like to keep open. I'm sooooo pleased. The bookcase and rug were both great deals. The white really pops against the gray walls – much better than the dark brown bookcases. It's all super lovely and I can't wait to spend more time in here.

Note: I know some of my pictures are crooked. I totally took the photo before straightening them. I was just too excited. ;)

Man, floor vents really are such a pain in the ass. Same thing for baseboard vents or whatever they're called, they basically decide how your room layout will go and you don't even get a say.

Until you just say F it and start putting furniture over them that is, lol.

You have totally changed your bedroom design to create office environment in your room. The updated version looks more cool and nice in the picture. As bought new bookshelf helps to arrange books in well mannered way. The white color of book shelf enhance beauty of the room. I also bought a office drawer in this pandemic from online store:- Fast Office Furniture. This company provides good quality of furniture and I am thinking to buy some other furniture for my office.

Such an excellent and interesting blog. Thank you for sharing an interesting topic about the home update with a new bookshelf.
you can also visit our website we have best and premium quality of office stuffs like
Officeworks bookshelves ,
chair, desk etc

These days, many people are working from home & facing the home office setup. I appreciate this blog cause there is unique information along with images. I was searching home office furniture in gold coast & I found this informative blog. Thanks