Q&A Quickie | Advice for a wine / whiskey drinker looking to get into craft beer? 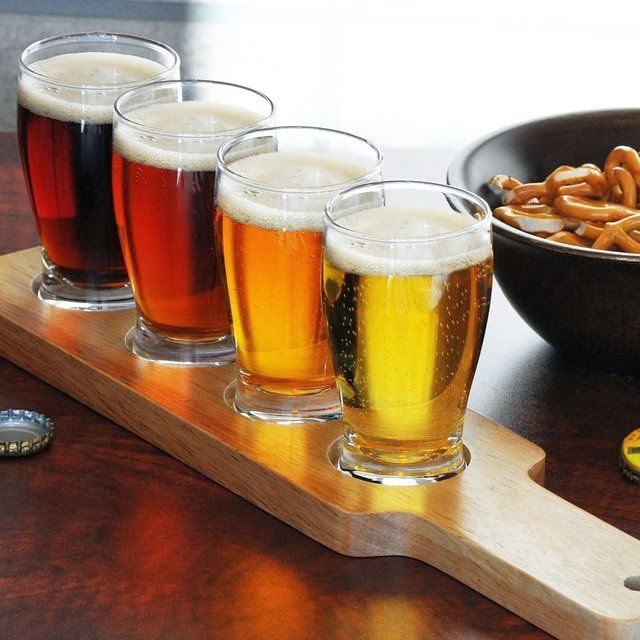 A really awesome brewery just opened up in town and I can't wait to spend my Friday nights there with my friends – but I'm not a beer drinker! Would you have any suggestions for a wine and whiskey drinker looking to develop a taste for beer? (asked by Shelby)

How exciting! To know me (and my other blog Yeast, Love, & Hoppiness, co-blogged with my bf) is to know that I love craft beer – especially when imbibed at local breweries. Before I begin with my suggestions, I must first divulge that I wasn't always a brew lover. In fact, just about two years ago I hated beer. It was largely due to the college scene – flooded with Bud Light, PBR, and the likes.
It was the thanks to the a local microbrewery's pint night that my taste buds fell in love. A sampler tray and the following $1 pints of delicious Off-Kilter Scottish Ale at Olde Main completely converted me.

Beer isn't necessarily an "acquired taste" as so many people insisted. No matter how many bad beers I'd had, I never acquired a taste for them. I believe that it takes one good gateway beer to open your mind and taste buds to the world of brews.

1. Swap wine for sours and whiskey for barrel-aged beer.

Since your a wine and whiskey lover, ask if the brewery has any sours or barrel-aged brews. Sours sometimes have a wine taste to them. Several that I've tried reminded me so much of red wine that I ended up saving them for pasta. It's also increasingly popular for breweries to age beer in whiskey barrels. You can't miss the whiskey taste – these barrel-aged brews are delightful.

2. Get a sampler of the brewery's goods.

I do this at almost every brewery (and many bars) that I go to. Samplers can include anywhere from three or four to ten different brews (or more!). You and your friends can go in on one together and each take a few sips of the different beers served in small glasses. You're sure to find out what you like and what you don't like. If there are no samplers available, you can usually ask for a little taste of a beer before you order it.

Breweries are the best place to start your beer tasting adventures because the brewers are often hanging around and even work as bartenders. They love to tell you about their creations. Plus, breweries draw beer snobs like moths to a flame. Beer snobs love to share their opinions and favorites, so don't be intimidated! Think of beer snobs as ambassadors to the craft beer community. Tell the bartender, brewer, or beer snob what kinds of flavors you like.  Your taste buds will be in for a treat!

4. A few of my personal taste suggestions:

Love coffee and / or chocolate? Try a porter or stout. (These are what turned me onto beer in the first place.) Don't be deceived by the dark colors – it doesn't mean they're any heavier. Guinness will actually sit on top of Blue Moon. Like fresh, citrus, pine-infused flavors? Try an IPA. I wasn't a big fan of the bitterness the first time I tried one, but the bitterness and flavors range from floral to citrus. Thanks to the variation and trying a whole bunch of them, I'm a huge hophead now. Saisons are another favorite style of mine, which surprised me when I liked them because I lean toward darker beer. Saisons are often brewed with spices – like my personal favorite, coriander.

Contrary to what I thought two years ago when I loathed beer (thanks to those college parties where the cups runneth over with PBR)... not all beers are the same. And not all beers are created equal. Sample as much as you can. If you get a sample and don't like it, tell the bartender why. They'll probably be able to recommend something else. Don't be afraid to ask anyone in the brewery a question. Like I mentioned above, brewers and beer snobs alike will welcome you into the craft beer community.

All it takes is one great "gateway" beer to open the gate to your love of beer.

Head over to Yeast, Love, & Hoppiness for my beer reviews and brewery experiences.

Do you have a quick question for The Lovely Side? Email it to jessica@thelovelyside.com or use the contact form in the right-hand menu of the blog.